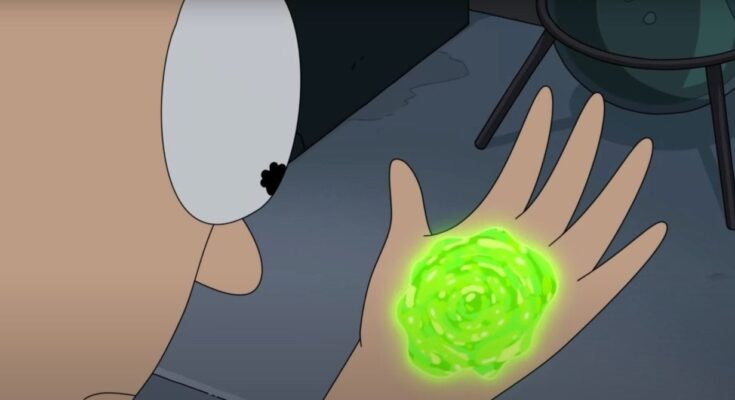 Rick and Morty has shared the first few minutes of its one-hour finale for Season 5 of the series! Following the debut of the eighth episode of the season last month, the series will finally be returning fort the final two episodes of the fifth season later this weekend. These will premiere as part of a special one-hour block for the series on Sunday, and will consist of the final two episodes of the season, “Forgetting Sarick Mortshall” and “Rickmurai Jack.” Naturally, it’s a huge occasion for Adult Swim as they have already been celebrating in some huge ways.

Not only did Adult Swim release a special music video featuring tons of new footage from the upcoming Season 5 Episode 9, but they also dropped a fun live-action promo imagining Christopher Lloyd as Rick Sanchez in some alternate universe. Now fans have gotten an even better look at the first few minutes of the Season 5 finale with the opening scene released by Adult Swim. You can check it out in the video above!

As teased through the first promos and trailers we had gotten for the fifth season’s penultimate and final episodes, the first few minutes of Episode 9 see Morty seemingly going back and fixing mistakes and damages Rick has done throughout their adventures. This continues the trend seen throughout the season of the titular duo splitting further apart over the course of the episodes thus far, and it looks like it’ll all come to a head with this finale.

This is only a glimpse at the first of the final two episodes, and it’s unclear as to whether or not they are truly connected in a two-parter kind of way but it will certainly be interesting to see where the fifth season will choose to end things between Rick and Morty considering just how much the two of them have been growing tired with one another. We’ve also learned some major new things about Rick this season as well, so there’s a chance these final episodes will jump on that as well.

We’ll see soon enough as Rick and Morty will be returning to Adult Swim on Sunday, September 5th starting at 11:00PM EST with the final two episodes of Season 5, “Forgetting Sarick Mortshall” and “Rickmurai Jack. What do you think? How do you feel about this newest look into Rick and Morty’s Season 5 finale? What are you hoping to see with these final episodes? Let us know all of your thoughts about it in the comments! You can even reach out to me directly about all things animated and other cool stuff @Valdezology on Twitter!