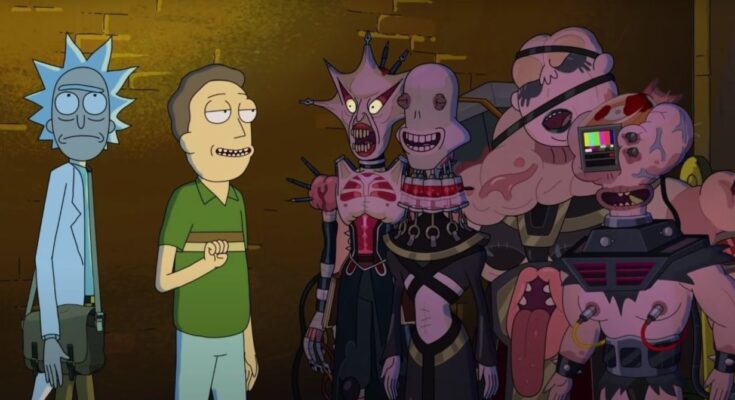 The writer behind Rick and Morty‘s newest episode detailed parodying Hellraiser‘s Cenobites for Season 5! The Adult Swim animated series has now crossed the halfway point of its fifth season, and with it showed off its most pop culture heavy episode yet. While not the wildest episode of the series (or even season when compared to what happened in the fourth episode), it did feature a wild slate of adventures as not only did it showcase the death of parodical takes on the Transformers and Marvel’s Galactus, but on Hellraiser‘s Cenobites as well.

With the Cenobites playing a central role in the story for the episode, writer behind Episode 5, “Amortycan Grickfitti,” Anne Lane and Rick and Morty co-creator Dan Harmon opened up about tackling the irony behind the franchise and taking it to an exaggerated level (as one might expect from a cynically comedic series such as this one) for the Adult Swim show in a special Behind the Episode video released by Adult Swim. You can check it out in the video above!

As Harmon and Lane explained, the central conceit of having Rick use Jerry’s awkwardness to fulfill a debt he had to the Cenobites began with a take on Dinner for Schmucks where Jerry was going to be unaware of that. Adding Hellraiser‘s Cenobites, who Harmon describes as “dripping with irony,” to the mix was something the writers wanted to tackle and twist their simplistic take on happiness and pain into something fitting for the series.

But as Lane notes further, and as fans had seen in the episode, Rick does feel guilty about using Jerry in such a way. That’s why the episode shows that Rick will literally go to Hell and back just to rescue his daughter’s husband. Lane even notes that there are solutions Rick has that could outright take Jerry out of the picture entirely, but he refuses to do so. So that also means that there’s a potential there for a much deeper connection, and maybe even friendship for them in the future.

What did you think of Rick and Morty’s take on Hellraiser‘s Cenobites in the newest episode? What did you think of the episode overall? What are you hoping to see from Rick and Jerry before the season comes to an end? Let us know all of your thoughts about it in the comments! You can even reach out to me directly about all things animated and other cool stuff @Valdezology on Twitter!