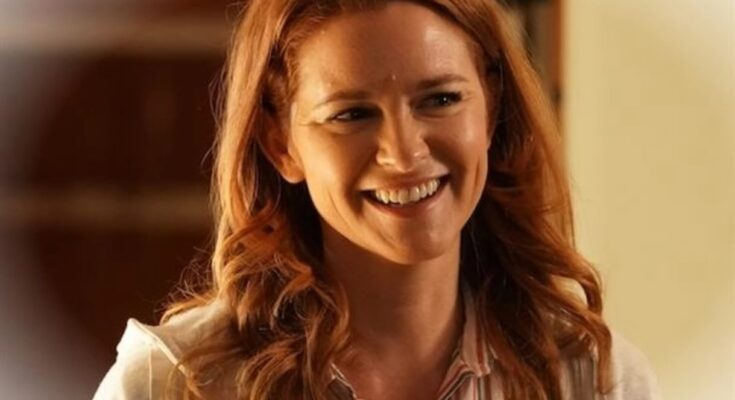 Grey’s Anatomy season 18 is soon to premiere on 30th September 2021. The show is based on the fictional life of medical interns and the people around them. Well, Grey’s Anatomy has been a big part of every fan of it. Certainly, it is one of the longest-running shows and still has no news of getting terminated.

Sarah Drew became a household face as April Kepner. However, she was untimely and unfairly departed from the show in season 14. She got married to her ex-fiancée Matthew Taylor and left Grey Sloan Memorial. However, Sarah Drew was unhappy with the development. She tried for a different ending for her character. She did everything in her power for it, but sadly, it didn’t help.

Recently, Lynette Rice released an unauthorised book “How to Save a Life: The Inside Story of Grey’s Anatomy,”. The book orally explains the bts of the iconic show. However, according to the book’s author, many of the cast decided to not speak much about the secrets and storyline. Thus they did not want to piss off the show’s creators.

Drew left the show in 2018 and in the show her character ended with Matthew. April and Jackson’s love story was an iconic part of the show. When the news of her exit came, it shocked fans. But the fact that she was reunited with Matthew with Jackson standing right there left Drew and Fans heartbroken. Drew always wanted her character to end up with Jackson especially after their daughter Harriet.

Y’all have no idea how much work we both put into these stories. The late nights, rehearsals & rewrites. The patience, frustration & tears. You didn’t always love us. Somethings take time, effort & trust. #Japril will last forever for a reason. #ThankYouSarahDrew @sarahdrew pic.twitter.com/tZQfIee2Dk

In the book, it is revealed that Drew, thus wrote a letter to Krista to change her character’s ending. She even suggested letting April go independently, but her suggestion was turned down. Japril‘s end season 14 left both the actors and fans disappointed and anguished.

Well, ABC and Vernoff representatives have declined to say anything about the revelations made by the book.

Japril spin-off – Need of the hour

Fans are expecting a spin-off for Dr. Jackson Avery and Dr. April Kepner. Season 17 showed departure of Jackson when Jesse Williams left the show after 12 seasons. It gave a chance to fans to see their favourite Japril back together. Sarah Drew was called back for an episode to give Jackson a fitting farewell.

It’s believed that Williams had his share in bringing Sarah back for one last time. He like Sarah was utterly disappointed with her departure from the show. Williams never stopped talking about Japril and Sarah long after she was gone.

In season 17, along with Jackson April decided move with him along with their daughter to accompany him. Their relocation to Boston is to contribute in medical help for minorities. The storyline left a wide arc open for a new storyline, a Japril spin-off.

Williams and Drew have repeatedly shown their interest in working on a spin-off and working together as a team. Recently, Williams shared a picture of himself with Drew and Debbie Allen to congratulate the latter for Governors award. Was it a hint or Williams just miss working with his two favourite co-stars? The friendship and working dynamic between the duo is yet another reason to bring them back together.

With huge popularity that Japril continue to enjoy, a spin-off should be on cards for ABC. We certainly can’t have enough of Drew and Williams together. Sadly, we didn’t even get to see enough of their powerful chemistry and stellar performances.