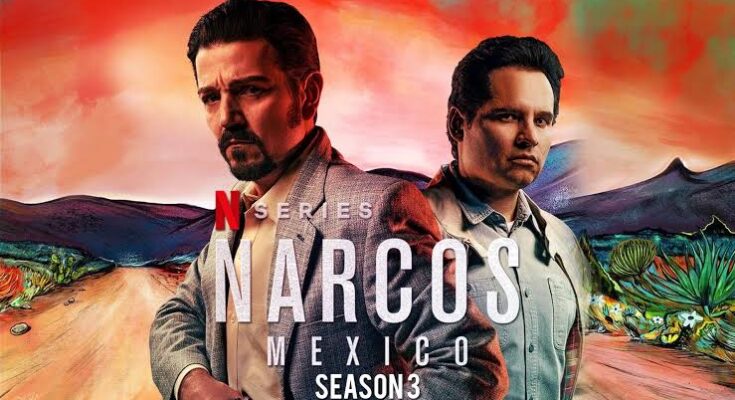 The final season will be releasing on November 5

Narcos: Mexico has now reached its final chapter. Season 3 will wrap up the story, and will be told in ten episodes. It comes out on November 5. The Mexico reset series will be the franchise’s sixth overall outing. The cartel/ crime drama remains one of Netflix’s prized cows.

The showrunner for season 3 will be Carlo Bernard, the co-creator and executive producer since the Gaumont-produced show came out in 2015. Bernard took over from Eric Newman, who got busy with several other Netflix projects due to his overall deal with the streaming giant. However, Newman is still an executive producer for the show, along with Sidonie Dumas, Christophe Riandee, Nicolas Atlan, José Padilha, Doug Miro and Andrés Baiz.

Back in 2020 when the show got renewed, Newman had a chat with The Hollywood Reporter. Newman spoke about the risk Netflix took when it decided to bankroll a series which is shot in two languages, in a country that never had such a kind of show before.

One of the directors for the third season will be former Narcos star Wagner Moura, famous for portraying crime kingpin Pablo Escobar. Moura had even done a small cameo as Escobar in Narcos: Mexico. The other directors will be Andrés Baiz, Alejandra Márquez Abella, Luis Ortega and Amat Escalante.

The story picks up after Felix Gallardo (Diego Luna) gets arrested. It will be set in the ’90s, and the globalization of the drug empire is set in motion. Season 3 will tell the story of the war that broke out following Felix’s arrest.

What’s also special is that season 3 will have its first female narrator. Newcomer Luisa Rubino, who joins as an ambitious and righteous young journalist, will be the narrator. Her journey to expose the corruption ends up being bigger than what she hoped.

Check out the trailer below: