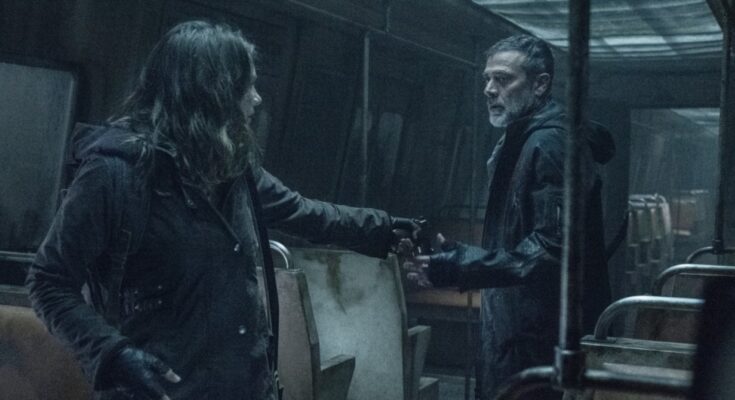 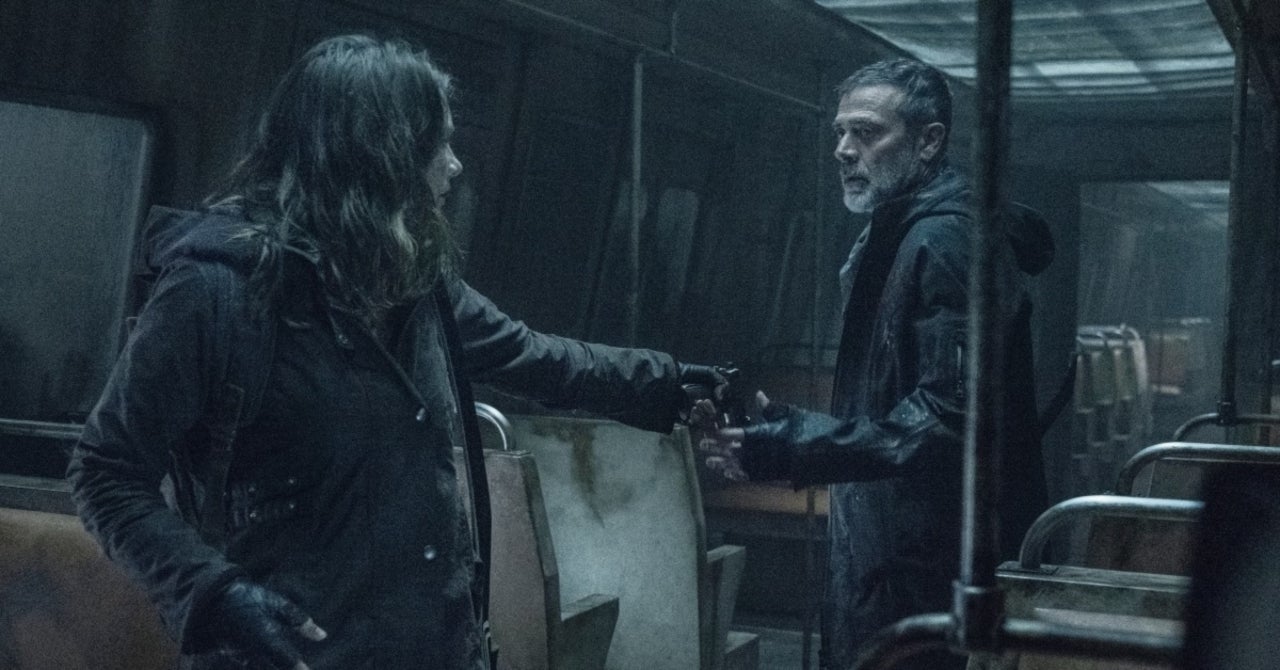 “She hates him but needs him,” says Jeffrey Dean Morgan of the temporary truce between Negan and Maggie (Lauren Cohan) on The Walking Dead. Despite the vengeful widow’s vendetta against him over the Season 7 murder of Glenn (Steven Yeun), her husband and the father of her son Hershel (Kien Michael Spiller), Maggie and Negan are working together to take back Meridian from the Reapers and save Alexandria. After Negan leaves Maggie behind to die to end “Acheron: Part 1,” she survives — only to trust Negan with a weapon when walkers surround their group in “Acheron: Part 2.”

“Did she look at him because ‘I’m gonna give you a gun and you might shoot me?’ I don’t know, but Negan looks at her and says, ‘Give me the gun so I can go take care of the walkers that are coming up our six,'” Morgan said of the scene set in a zombie-swarmed subway car on Talking Dead. “Maggie hates Negan, that’s it. Maggie wants him dead. Unfortunately for her, the only out, the only way that she’s going to survive certain situations is if she lets Negan into the fold. It’s as simple as that.”

“What it is, is kind of what it is,” the Negan actor added. “She hates him but needs him.”

Cohan countered Morgan’s recollection of events, saying on Talking Dead, “It’s interesting how Jeff said there ‘Negan tells her he needs that gun.’ Maggie decided that she was better off and trusted him in that moment and decided to give him the gun. It can be whatever Jeff wants it to be, but that’s what really happened (laughs).”

Negan knows his way around the streets of D.C., making him useful for the Meridian-bound group’s mission to save a starving Alexandria. According to Cohan, the widowed mother won’t let her husband’s murderer turn her into a killer — explaining why Maggie hasn’t killed Negan.

And if they hope to survive being hunted by the Reapers, Maggie’s going to have to keep trusting Negan. For now.

“An important moment in the arc between Maggie and Negan is, there’s this moment where they feel like they’re just in real trouble, and maybe they’re all going to die, and Maggie hands Negan a gun that she has on her,” showrunner Angela Kang explained on The Walking Dead: Episode Insider. “Maggie really is just kind of like a cold hard leader at that point. Right then, he’s just an asset. The mission has become more important than any one individual or any one dynamic that exists between them, and that is true even for her.”

When Negan hands his gun back to Maggie at the end of “Acheron: Part 2,” Kang said, “Maybe there is at least this tiny, tiny bit of trust that has passed back and forth between them, and that’s going to just be part of the shifting sands that they’re on as they’re going through this mission together.”

READ: TWD Showrunner Says Maggie and Negan “Trust” Each Other in “Acheron: Part 2”