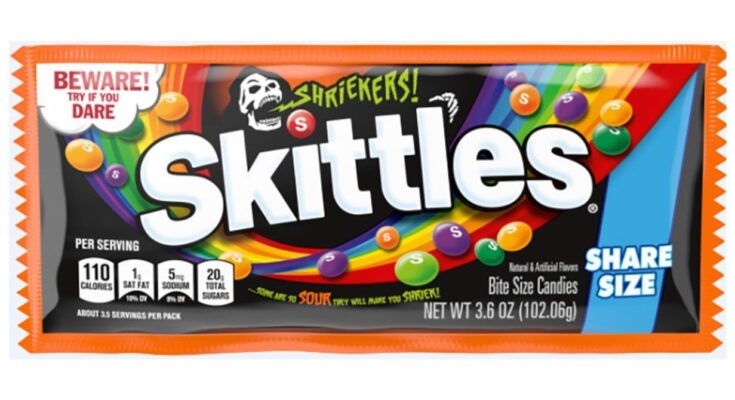 Halloween is just around the corner and with spooky season also comes spooky candy. This year, Skittles is releasing the new, limited-edition Skittles Shriekers. The candy is described as packing a frightfully sour flavor thanks to the super-sour candies hidden inside each pack of Shriekers. They look just like ordinary Skittles, but pack a very sour punch that will shock candy loves so much they will “quite literally shriek”.

“SKITTLES is always looking for new ways to surprise fans with unexpected flavor experiences,” said Tanya Berman, Mars Wrigley Seasonal Marketing Lead. “This year we focused on putting a new spin on a spooky treat, bringing better moments and more smiles to people as they gear up for the upcoming Halloween season.”

Skittles Shriekers candy includes five “frightening flavors” in each pack. Those flavors include Citrus Scream, Ghoulish Green Apple, Rattled Raspberry, Shocking Lime, and Spine-Tingling Tangerine and while these are perfect for Halloween, fans don’t have to wait to try them. Skittles Shriekers are available at retailers nationwide now and come in 1.8 oz single packs, 3.6 oz Share Size, and 10 oz Medium Funsize Laydown Bags.

This isn’t the first time that Skittles had unleashed a Halloween candy. In 2019 Skittles offered limited-edition Zombie Skittles with a similar premise. Each pack of Zombie Skittles featured a mix of five fruity flavors: Petrifying Citrus Punch, Mummified Melon, Boogeyman Blackberry, Chilling Black Cherry, and Blood Red Berry. Mixed into those tasty flavors, though, was the repulsive rotten zombie piece. Hidden beneath the candy shell of select pieces in the pack is the rotten zombie flavor that only revealed itself once you started to chew. At least this time around the flavor will be something shocking rather than rotten.

Will you be checking out the new Skittles Shriekers? Did you try Zombie Skittles in the past? What is your favorite Halloween candy? Let us know your thoughts in the comment section!