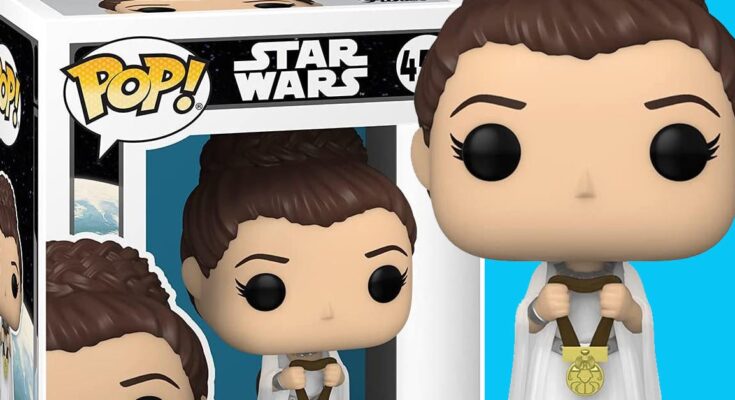 Funko’s Star Wars Across the Galaxy Pop figure series continued over the weekend with the surprise debut of a Princess Leia (Yavin) Pop from A New Hope. It features Leia in her ceremony outfit, holding a medal to award to the heroes who fought to destroy the Death Star (Luke Skywalker and Han Solo).

The Princess Leia Yavin Ceremony Funko Pop is an Amazon exclusive that you can pre-order right here for $11.99 while it lasts. The release date is set for November 1st. While you’re at it you might want to check out the huge list of Star Wars The Black Series and Vintage Collection releases that Hasbro launched last week. In addition to new action figures, the lineup also includes the Rey Force FX Lightsaber. Details on the items can be found right here.

You’ll want to get your pre-order in for the Princess Leia Pop figure sooner rather than later, because Star Wars Across the Galaxy Funko Pop releases have a habit of selling out. This is especially true wit the recently released Force Ghost 3-Pack.

The Star Wars Force Ghost 3-Pack includes glow-in-the-dark Pop figures of Anakin Skywalker, Yoda, and Obi-Wan Kenobi (Endor) as they appeared in Return of the Jedi. Hopefully, pre-orders will return here on Amazon (exclusive) soonfor $29.99. The release date is set for October 15th. it was released alongside the Wicket W. Warrick Funko Pop with a matching enamel pin. This Pop figure is still available to pre-order on Amazon (exclusive) for $14.99 with a release date set for October 1st.

Funko kicked off their partnership with Amazon on the Star Wars Across the Galaxy Pop figure series back in March with the release of an Obi-Wan Kenobi (Tatooine) Funko Pop with a bonus pin and a new Pop of Qui-Gon Jinn with a drawn lightsaber. Details on those releases can be found right here.