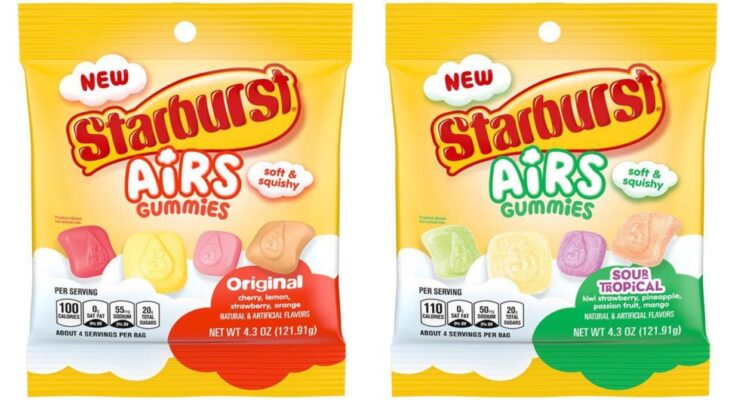 Starburst is taking gummies to the next level with what Mars Wrigley, the company behind the popular candy, describes as “next generation aerated gummi candy” with the launch of new Starburst Airs. The new candy, which is set to hit store shelves this fall, features an inflated texture that creates a bouncy gummi with all the flavor fans of Starburst candies know and love.

According to a press release, Starburst Airs will roll out first to select retailers this fall and will then be available nationwide starting in 2022. They will be available in two varieties, Original and Sour Tropical. Original packs feature cherry (red), lemon (yellow), strawberry (pink), and orange flavors while Sour Tropical packs will feature kiwi strawberry (green), pineapple (yellow), passion fruit (purple), and mango (orange) flavors. Starburst Airs will be available in 4.3 ounce PEG bags and prices will vary by retailer.

“Starburst is delivering better moments and more smiles to gummi fans with our next generation aerated gummies – Starburst Airs,” said Justin Hollyn-Taub, Senior Director, US Fruit Snacks for Mars Wrigley. “Starburst Airs are reimagined gummies that will leave candy-lovers enamored with the combination of Starburst flavors in a pillow-like texture.”

Starburst Airs are just the latest candy innovation from classic candy. Last year, Starbust introduced Starburst Swirlers, a stick-shaped take on Starburst that combines two iconic Starburst flavors rolled into one stick, giving candy fans pairings such as Strawberry-Cherry, Orange-Strawberry, and Cherry-Lemon. Starburst has also branched out into other offerings in the past as well, including candy corn, jelly beans, and more traditional gummi candies.

Starburst Airs will roll out to select retailers this fall and launch nationwide in 2022.

Will you be checking out the new Starburst Airs? What is your favorite Starburst flavor? Do you have a favorite type of gummi candy? Let us know your thoughts about this latest Starbust candy and all things candy in the comment section.