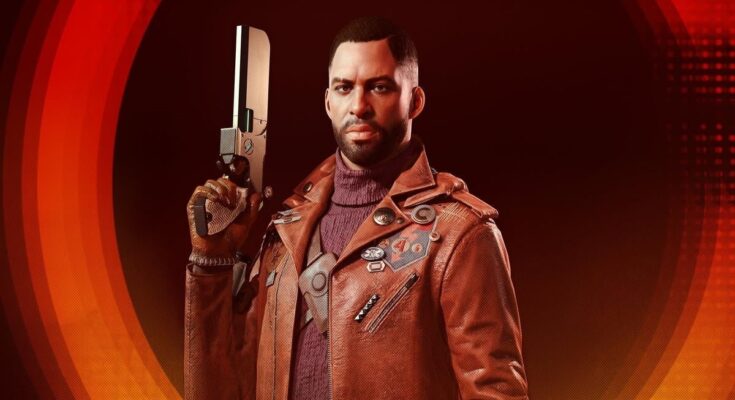 Although I’ve always respected developer Arkane Studios, the company has never crafted experiences that I have wholly adored. This combined with the notion that much of what I had seen of Deathloop prior to launch came across as obtuse and cumbersome made me a bit uncertain about how it would turn out. After playing the finished game, though, Deathloop is by far one of the best games I have played in 2021. Not only does it offer up an experience that is unlike anything else I can think of, but it’s filled to the brim with style and charm while also keeping Arkane’s penchant for level design intact.

Deathloop has a unique format that places you in control of two different characters: Colt and Julianna. For the majority of the experience, you’ll be in the shoes of Colt, who finds himself continually waking up every morning on the shores of an island named Blackreef. Colt, along with everyone else on the island, find themselves caught in a time loop where the same day repeats over and over. While almost everyone on the island enjoys repeating this same day, Colt very much wants out of it. To that end, he discovers that he has to kill all of the “Visionaries”, which are essentially the ones who created the time loop on Blackreef, in order to break this cycle. In turn, Julianna is out to stop Colt and kill him, ensuring that the loop continues unabated.

When it comes to seeing the story through to its end, nearly all of the major narrative beats in Deathloop are found in Colt’s section of gameplay. Conversely, Julianna’s plays out more like a multiplayer game. When controlling her, you’ll invade another player’s ongoing session with the aim to take them down. It’s a bit similar to the Dark Souls series in how you can dive into the worlds of other players to simply impede their current progress. In turn, Julianna has her own skills, weapons, and other features that you can unlock along with a number of challenges and objectives that all tie back in with killing Colt.

For the most part, I really only found Colt’s gameplay to be the enjoyable part of Deathloop. Playing as Julianna can be fun in its own way, but I often found the PvP aspect of the game to be rather trite. Part of this is because each of the four main areas in Deathloop are a bit too big for this PvP style of play. There were times where I would invade a certain player only to run around as Julianna for a good five to ten minutes without ever finding where the Colt I was hunting down could be found. In a general sense, I think this format can make for a fun game of cat and mouse, but it likely works best when the players you’re invading are friends rather than unknown players.

Despite these qualms with Julianna’s section of Deathloop, the real reason you’ll want to pick this game up comes with everything found when playing as Colt. The game’s main offering is one that Arkane affectionately refers to as a “murder puzzle”, and that’s honestly the best descriptor I can think of. In order to break the time loop, Colt has to find a way to kill all eight Visionaries on Blackreef in a single day. Unfortunately, each of the eight targets are sequestered in different parts of the island, meaning that there is no way to kill all of them one by one before the day resets and brings them back to life.

This means that much of what you have to do in Deathloop results in some serious detective work. While you’ll be engaging in plenty of shootouts with foes and have a number of cool abilities to use (many of which will be familiar to those who have played the Dishonored games), Deathloop is more about gathering information and figuring out how to get these Visionaries in the same spots at the same time so that you can create an efficient path to kill them all.

For instance, one discovery that you’ll make involves a love affair between two of the Visionaries on the island. You’ll learn that every day at a given time, they meet up on a certain section of Blackreef to, well, you get the point. After figuring out how to gain access to their love den, you can proceed to take both down in one fell swoop, giving you more time to take down the other remaining Visionaries on your kill list.

This process of discovering new information related to each Visionary slowly over time is the aspect of Deathloop that I found myself loving more than anything else in the game. It reminds me quite a bit of a title like Return of the Obra Dinn, where you have to slowly piece together everything that is happening around you so that you can figure out the backstory. Information is your greatest weapon in Deathloop and the process of uncovering it all bit by bit is highly compelling.

Learning more about each character in the game is also where the majority of Deathloop’s storytelling comes from. Although Colt and Julianna are the centerpiece of the narrative, with both having a unique relationship to one another, much of the characterization and writing in the game shines as you begin to become more acquainted with the targets you’re actually looking to kill. Each of the eight Visionaries are well fleshed out and have their own personalities, talents, and obsessions. Learning more about each character makes it all the more satisfying when you do end up taking them down.

Outside of this general gameplay loop, Deathloop is also packed full of many other impressive features. As mentioned before, one of the standouts in this regard happens to be the level design. Arkane has always been synonymous with crafting levels that give players a multitude of options when it comes to gameplay and that continues to ring true in Deathloop. What might be most impressive about Arkane’s latest outing, though, is that Deathloop as a whole isn’t a very big game. There are only four primary locations in the game for players to explore, which doesn’t seem like a whole lot when compared to previous titles from the studio. However, it’s the sheer amount of depth that each area offers which has bewildered me.

What’s even more impressive is that Arkane has made it to where each of the four locales in Deathloop change quite a bit depending on the time of the day you might visit. Specifically, each in-game day within Deathloop is segregated into four time periods: morning, noon, afternoon, and evening. So if you visit Fristad Rock in the morning, for example, there are certain areas that won’t be open or accessible compared to if you were to go in the afternoon, and vice versa. This keeps nearly every location feeling fresh in some way as the game goes on because you often won’t be visiting the same levels at the same time of the day very often.

When it comes to the actual act of playing Deathloop, most of the gameplay mechanics found here are what players have come to expect from the developer. As mentioned before, there’s a lot of commonality between Deathloop and what was seen in the Dishonored series. Certain abilities such as teleportation and linking enemies together so that you can take them down in one fell swoop return here, which I am not complaining about in the slightest.

The one big shift, especially compared to Dishonored and its sequel, is that guns are the main way in which you’ll look to engage in combat. Generally, these weapons simply get the job done but otherwise aren’t too special. Most of what Colt and Julianna can use include the usual array of pistols, machine guns, shotguns, and so on. None of the guns, even the more unique ones, ever stood out to me very much when playing, which isn’t necessarily a bad thing. They’re just the means by which you look to kill enemies and nothing more.

If there is one lingering problem that I did have with Deathloop, it is the various bugs and other random problems that I ran into with some regularity. One issue that I had more than a couple times involved clipping through the environment, which became quite annoying. In one instance, I found myself Shifting into a section of the world that I couldn’t get out of. As a result, I had to completely back out to the main menu, which caused me to lose all of the progress that I had made within that run. My game also completely crashed back to the PS5 dashboard a time or two as well, which I found quite frustrating. If Arkane can iron out some of these annoyances post-launch, Deathloop will be a much better game as a result.

All in all, Deathloop is my biggest surprise of the year. While it might be expected that Arkane would craft another high-quality experience, I’m personally astonished by how much the studio’s latest release has clicked with me. Even though it might have a lot of common DNA with what Arkane has done before, the sheer amount of style and inventiveness that can be found in Deathloop makes it stand out greatly in a crowded video game market. If you’re looking for something completely different compared to everything else that has released this year, Deathloop is absolutely worth getting lost in.

Deathloop is set to release on September 14th and will be coming to PlayStation 5 and PC. A game code was provided by the publisher for the purposes of this review and it was reviewed on PS5.