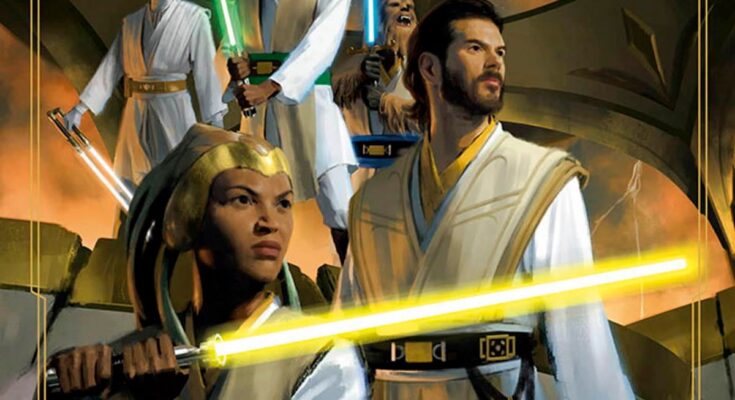 Lucasfilm has revealed a first look at the cover artwork for the upcoming third wave of Star Wars: The High Republic releases. The story follows the Nihil’s attack on the Republic Fair and Marchion Ro releasing the terrifying creature he calls the Leveler in The Rising Storm. A teaser hinted that “The Light of the Jedi goes dark.” This apparent callback to Light of the Jedi, Charles Soule’s novel that launched the project, suggests the Jedi of The High Republic era may be facing a more significant threat than anything they’ve encountered in some time.

The High Republic’s third wave will have an expanded offering of comics as well. Marvel Comics’ Star Wars: The High Republic ongoing series continues, and the miniseries Trail of Shadows will release its fourth issue. Soule returns to pen the Eye of the Storm miniseries, finally revealing Marchion Ro’s origin story.

Finally, the third wave also brings the second volume of The High Repubic’s manga series The Edge of Balance. Older and Shima Shinya write the series, with art by Mizuki Sakakibara.

What do you think? Are you excited for more Star Wars: The High Republic? Let us know in the comments.

In this gripping sequel to Star Wars: The Rising Storm, the light of the Jedi faces its darkest hour.

Hanging like a jewel in the Outer Rim, the Beacon embodies the High Republic at the apex of its aspirations: a hub of culture and knowledge, a bright torch against the darkness of the unknown, and an extended hand of welcome to the furthest reaches of the galaxy. As survivors and refugees flee the Nihil’s attacks, the Beacon and its crew stand ready to shelter and heal.

The grateful Knights and Padawans of the Jedi Order stationed there finally have a chance to recover-from the pain of their injuries and the grief of their losses. But the storm they thought had passed still rages; they are simply caught in its eye. Marchion Ro, the true mastermind of the Nihil, is preparing his most daring attack yet-one designed to snuff out the light of the Jedi.

Another exciting middle grade adventure featuring Jedi and their Padawans as they fight the nefarious villains the Nihil!

Another exciting young adult adventure featuring Jedi and their Padawans as they fight the nefarious villains the Nihil!

The Story of Marchion Ro.

The ongoing series continues the adventures of Avar Kriss and the rest of the Jedi stationed on the Starlight Beacon.

The mystery continues. Following the shocking events of the Republic Fair, the Jedi call upon one of their own, Emerick Caphtor, to investigate a strange mystery with ties to the Jedi Order. At the same time, Chancellor Lina Soh calls upon Sian Holt, a high-end, in-demand private detective to look into the same mystery. But will either solve this riddle before anyone else dies?

The Edge of Balance, Vol. 2

In the aftermath of the Hyperspace Disaster, young Jedi Knight, Lily Tora-Asi is assigned to help displaced civilians relocate to Banchii, a newly inhabited planet in the Inugg system far in the outer rim. Banchii is the site of a new Jedi temple led by Master Arkoff, Lily’s Wookiee mentor, who imagines the temple as a place of peace for new inhabitants and for those who are traveling beyond. While balancing the arrival of incoming settlers with the strange mysteries of this remote outpost, Lily wonders if she’s doing enough to bring peace to the galaxy. But when hidden dangers begin to emerge, the young Jedi will face her greatest challenge yet . . .

Star Wars: The High Republic Adventures Annual 2021 is a one-shot comic book. For the first time ever – welcomes Lucasfilm’s entire team of High Republic lead story architects to share tales from their favorite corners of the galaxy in one place.

Claudia Gray, Justina Ireland, Daniel José Older, Cavan Scott, and Charles Soule are the celebrated comic book and prose authors behind Star Wars: The High Republic, the sprawling new era in the Star Wars saga that depicts the height of the Galactic Republic, centuries before the Skywalker Saga, when the new threat of the Nihil emerge in the Outer Rim. Partnered with exceptional comic artists including Sam Beck, Jesse Lonegran, Jason Loo, Yael Nathan, and Stefano Simeone, the five story architects will each shine a spotlight on fan-favorite heroes from their respective Star Wars projects in this 48-page, full-color anthology, aimed at middle grade readers.

The Masters and Padawans take a much needed break to participate in the Great Jedi Rumble Race! It’s the most important event in the galaxy (probably) and there’s only one rule… THERE ARE NO RULES! But Lula is too stuck in her own head to enjoy the raucous, no holds barred tussle to the finish line.

Lucasfilm has also revealed two new characters coming to Star Wars: The High Republic. One is the Nihil’s Quarren Commander Kara Xoo. The other is the mysterious Doctor Mkampa.