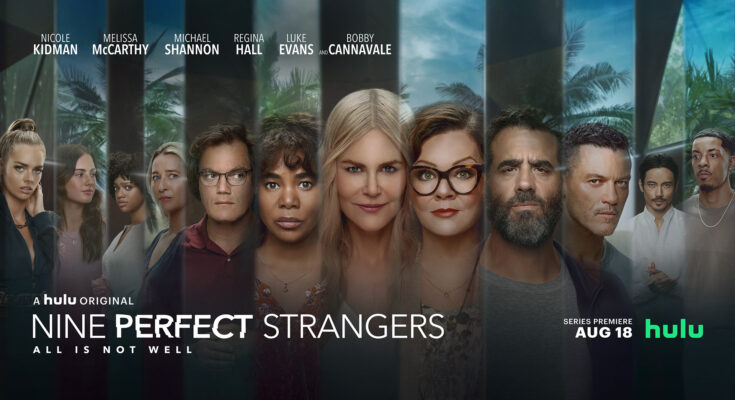 The most awaited series is here!

The upcoming Hulu TV miniseries Nine Perfect Strangers by David E. Kelley will bring together nine people at a health and wellness retreat. in spite of the fact that these people are hoping for a life-changing experience at the costly resort. Lovers of HBO’s Big Little Lies and Liane Moriarty’s books should be aware that they are in for a lot more than they hoped for.

The trailer appears to be dramatic

Hulu released a teaser trailer for the series titled “Your Journey to Wellness Begins Soon” on June 11. Fans got their first look at Kidman as Masha, the mysterious owner and leader of the healing retreat at the centre of the series, in the trailer.

Tranquillum House is pleased to welcome you. We’re going to take care of you. You come here to get better. This is going to be a fantastic adventure, In the teaser, she says. It will be unpleasant at times. There’s nothing to be worried about. You’re mine now…and you’d like to stay that way.

The eight-episode miniseries Nine Perfect Strangers will premiere on Hulu on August 18, with the first three episodes available on that day. Following that, each Wednesday, one episode will be broadcast on Hulu.

Hulu used the same release method with the book adaptation of Little Fires Everywhere in 2020. So we can binge-watch the first three episodes, but we’ll have to wait and watch the rest of the series in smaller chunks.

The Hulu miniseries Nine Perfect Strangers is based on Liane Moriarty’s book of the same name, which was published in 2018 and made the New York Times Bestseller list. Moriarty’s Big Little Lies was adapted for an HBO miniseries in 2017, and this is his second book-to-screen adaptation.

After the first season’s success, the second season of Big Little Lies was added, continuing the tale after the events of the novel. The fate of a possible Season 3 is still unknown.

Masha, the leader of Tranquillum House, will be played by Nicole Kidman, who won an Emmy for her role as Celeste in Big Little Lies. Melissa McCarthy will play Frances Welty, a romance novelist who is a retreat visitor. They lead a star-studded cast as the Marconi family, which includes Michael Shannon, Asher Keddie, and Grace Van Patten.