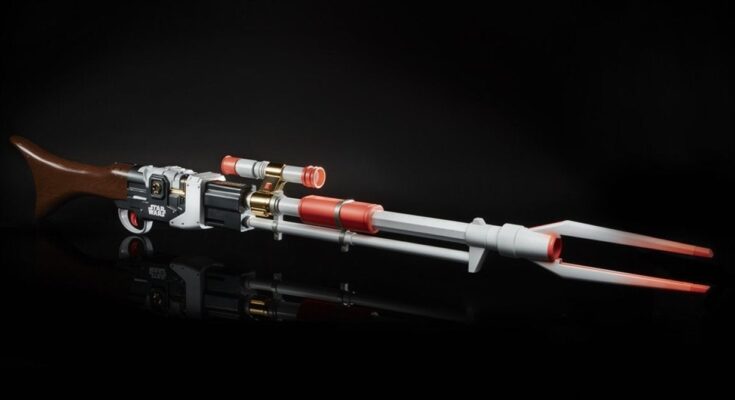 Nerf’s LMTD Star Wars: The Mandalorian Amban Phase-Pulse Blaster replica has been in pre-order since late last year, but the October 1st release date is finally on the horizon. Unfortunately, it sold out in pre-order at most retailers but you can still get it for the original $125.99 if you know where to look.

At the time of writing, the Nerf LMTD Star Wars: The Mandalorian Ambian Phase-Pulse blaster is available to pre-order here at Entertainment Earth for $125.99. It is currently sold out here on Amazon, here at Best Buy, and here at Hasbro Pulse. Additional details for The Mandalorian Nerf blaster can be found below.

The Amban Phase-Pulse Blaster / sniper rifle has been a fixture of The Mandalorian series as one of the primary weapons used by Din Djarin. Nerf’s replica blaster measures over 4 feet long (50.25-inches), and features sound effects and an electronic scope with an illuminated lens thanks to two AAA batteries (not included).

The blaster includes 10 darts, which load one at a time into the pop-up breech. To fire, pull back the priming handle followed by the trigger. Given the size of this rifle and the priming handle activation, we wouldn’t expect Mando’s Nerf rifle to be a long range weapon – but it will probably be the coolest blaster in your arsenal.

Additional images of Nerf’s Amban Phase-Pulse Blaster from The Mandalorian can be found in the gallery below. The first two seasons of Star Wars: The Mandalorian are now streaming on Disney+.