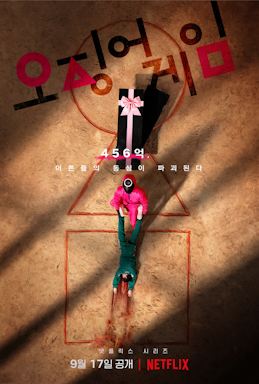 A Series of Games

Netflix is here with its new upcoming series “Squid Game.” It has launched the first poster and trailer for the same. “Squid Game” seems to be a creative and out of an ordinary show in which 456 players plays a mystery survival game by risking their lives to have a chance to win a jackpot of 45.6 billion Korean won.

It is set to be released on 17th September on Netflix itself. The trailer shows horrific moments of players in the games risking their lives to win the game. Driven to desperation and gathered in a secret location, the participants compete in one game every day to win.

Only one player can win the game. The failure of which will result in death. How did so many people end up playing the game who was the mastermind behind it and what did he want? The show’s dramatic contrast between the commotion and Squid Game’s vivid, vintage graphic design magnifies excitement for the show’s distinct aesthetics and substance.

Along with the visual of the squid game’s forms,’ the falling guy in the green tracksuit, the man in pink pulling him away, and the large package with the pink ribbon, the tagline “45.6 billion Is Child’s Play” delivers a powerful impression.

How will this ‘child’s play’ cost them their lives and how easy or difficult it is for the players. Every new information magnifies the curiosity of what will happen in the show. Due to its unique title and concept, unparalleled size, and outstanding track records of its cast and crew, Squid Game has gotten a lot of attention since its trailer is out.

This unusual and away from generic storyline brings a combination of childhood joy and present battle for life directed by Hwang Dong-hyuk. The other cast and crew members are Lee Jung-Jae, Park Hae-soo, Wi Ha-Jun, Oh Young-soo, Heo Sung-Tae, Jung Ho-Yeon, Anupam, and Kim Joo-ryoung.