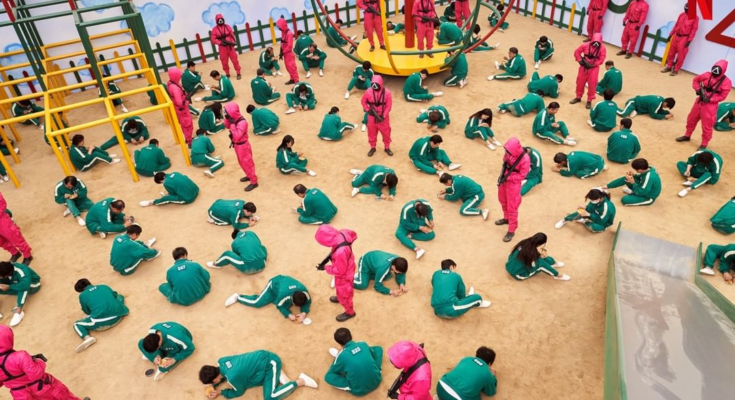 “Squid Game” on the top

“Squid Game” has made a new record by becoming the first K-drama to reach the top spot of the Netflix United States. Right from its release, the thriller show gained a lot of attention. The plot and presentation garnered viewers’ appreciation. And now, it has made its way to the top of the list.

The nine episode series Squid Game’s story is about 456 people including the stars who joins a game where the winner will get ₩45.6 billion prize ($38.5 million USD). However, there is huge risk of their lives as well. They have to participate in some deadly games and have to fight to death to reach the next level. The series is about their survival. There is a lot of violence and bloody scenes, so “Squid Game” is probably not for people with weak hearts.

Thought behind the series

The show is produced by Siren Pictures Inc. Hwang Dong-hyuk is the writer as well as director of it. He is also known for “The Fortress”, “Silenced”, “Miss Granny” and more. Hwang wrote the script about ten years ago. He said in a recent press conference that he was inspired by real life human struggle. In a interview with Soompi, the director said he wanted to connect nostalgic childhood games with never-ending competition of adult.

“Squid Game” started streaming on 17th of September. From Monday to Thursday it was on the second place of the same chart. Since Tuesday it straight went to top which made the record. On that top 10 series list the British teen drama “Sex Education” is on the second place which has released a 3rd season while Lucifer, a mystery show has took the 3rd position.