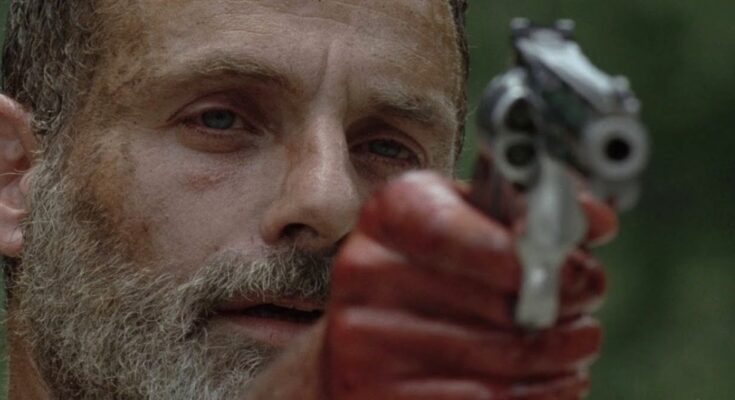 As AMC counts down to the final season of The Walking Dead with custom artwork taking a look back at past seasons, Marvel Comics artist Declan Shalvey shares a new piece paying tribute to the farewell episode of Rick Grimes (Andrew Lincoln). The artwork from Shalvey (Marvel’s Venom, Deadpool vs. Old Man Logan, Thunderbolts) immortalizes the “emotional climax” of Season 9 episode “What Comes After,” Lincoln’s final episode of the television series. In it, a gravely wounded Rick searches for his family, later blowing up a bridge to save his found family of zombie apocalypse survivors from a horde of walkers — seemingly costing Rick his life.

“A big climactic and emotional climax for the character that brings us into the world? You’d have to be heartless for it not to resonate, especially with that reaction Daryl has,” Shalvey said of the artwork debuted on TWDUniverse as part of AMC’s “11 Weeks of Reveals until Season 11” of The Walking Dead.

“To me it was about honing in on the more powerful imagery that’s more immediately communicated,” Shalvey said of the Season 9 tribute. “The image of the walkers walking off a burning bridge, I thought that was so messed up and harrowing, an image that really sticks in your mind. There was also a great near-final moment with a profile shot of Rick, with a bloody hand pointing his gun. I liked that a lot, but considering what happens to Rick here, I wanted to zoom in more on his face, for more contrast between him and the smaller walkers in the piece.”

Shalvey also shared a detailed look at the creative process on Twitter:

Like the Season 8 tribute memorializing Rick’s son Carl Grimes (Chandler Riggs), Shalvey’s artwork is available to own as a premium gallery wrapped canvas for sale on the official TWD store. Rick returns in the Walking Dead feature film spin-off in development from AMC Networks and Skybound Entertainment.

Follow the author @CameronBonomolo on Twitter for all things TWD. The Final Season of The Walking Dead premieres August 22 on AMC.