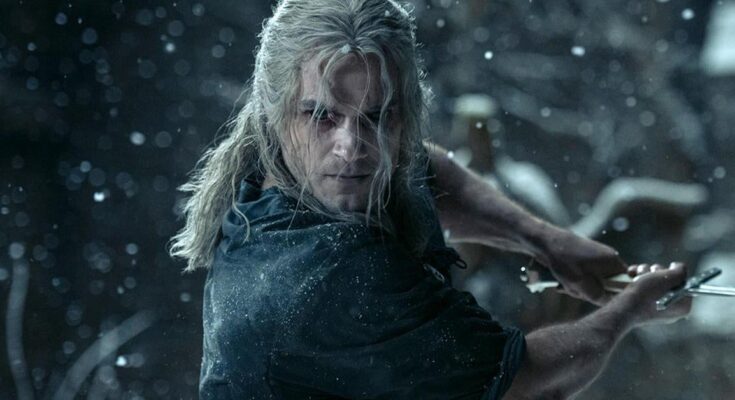 The Witcher season 2 is just 3 months away, and as we get ready for the new season fans are craving any new information or details they can get to pass the time (via EW). Thankfully we just got a brand new image of our favorite Witcher Geralt, as he readies his sword for battle. It’s snowing and you can see statues in the background, but it’s hard to tell exactly where Geralt is. The natural inclination is to think Kaer Morhen, but we’ll have to wait and see. You can check out the image below, and we even got a new comment from Henry Cavill as well.

Cavill talked about embracing his “paternal side” this season as he trains Ciri (Freya Allan) to master her power, and though he wouldn’t seem the type on the outside to be a more paternal figure, he’s a big old softie on the inside. “While he hasn’t necessarily been someone who craved children, he does take quite naturally to being a protector,” Cavill said.

Cavill will be training Ciri at Kaer Morhen after finally meeting each other in the season 1 finale, and Ciri will also meet the other Witchers calling Kaer Morhen home, including Lambert, Eskel, Coen, and of course, Vesemir. We’ve also seen in set photos that Yennefer will meet Ciri at some point, but we don’t know when that occurs, as season 1 leaves her fate up to question.

You can find the official description for The Witcher season 2 below.

“Convinced Yennefer’s life was lost at the Battle of Sodden, Geralt of Rivia brings Princess Cirilla to the safest place he knows, his childhood home of Kaer Morhen. While the Continent’s kings, elves, humans and demons strive for supremacy outside its walls, he must protect the girl from something far more dangerous: the mysterious power she possesses inside.”

Are you excited for season 2? Let us know in the comments and as always you can talk all things Witcher with me on Twitter @MattAguilarCB!