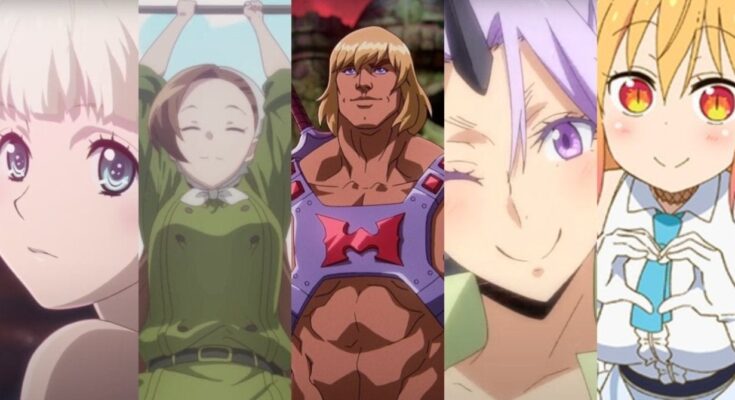 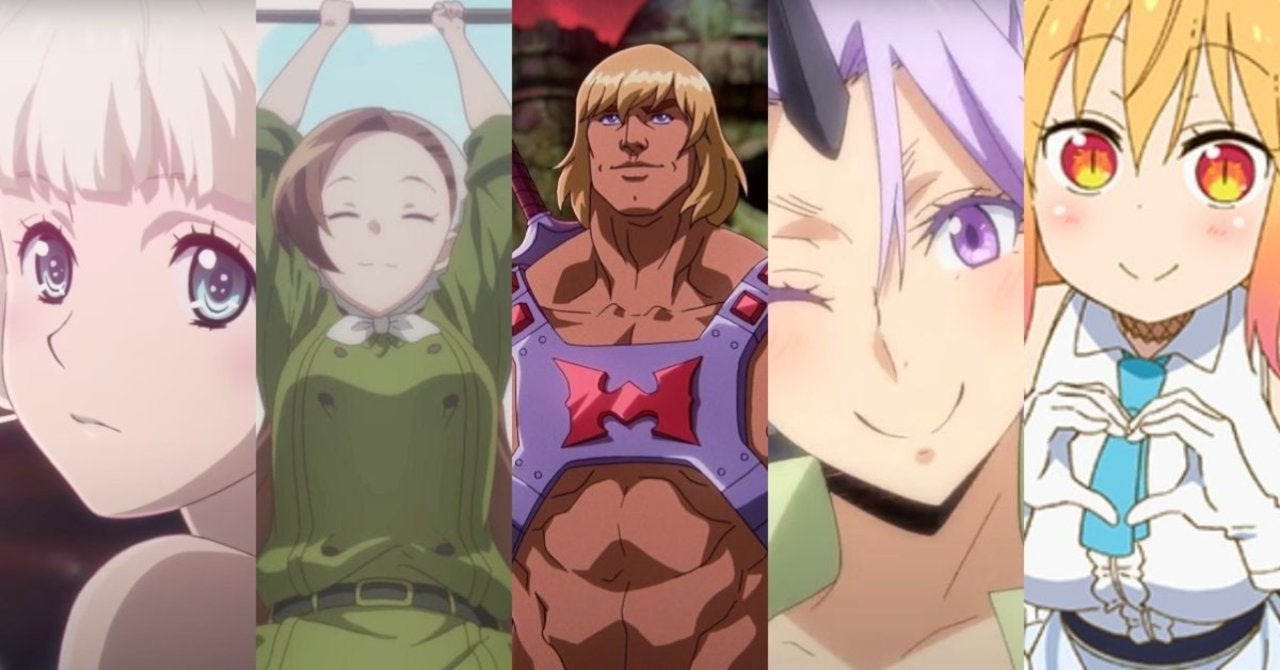 The Spring 2021 anime season has come to an end, and as fans have already seen with the start of July, the Summer 2021 anime season is now in full swing. Unlike this time last year, the Summer anime season has quite a lot of projects to look forward to not only from the regularly scheduled anime releases coming from Japan, but a bunch of new licensed releases and productions coming our way at last during this wave as well. There’s bound to be something to watch for anyone interested in jumping into the world of anime and animation this season.

Not only do we have continuing series (that aren’t mentioned here) such as Spring hits like My Hero Academia‘s first season, Tokyo Revengers‘ debut season, long running weekly shows like One Piece and Boruto: Naruto Next Generations, but this Summer sees the return of some major fan favorites like That Time I Got Reincarnated as a Slime, Miss Kobayashi’s Dragon Maid, My Next Life as a Villainess and more. There’s also brand new anime productions like Sonny Boy, Re-Main, and Fena: Pirate Princess.

You can’t count out Netflix either as this season also sees the premieres of some long awaited debuts like Beastars‘ second season, Shaman King, Masters of the Universe: Revelation and more. As one would expect, there are so many new offerings this Summer this list couldn’t possibly highlight them all. However, we have put together a preview of ten of our most anticipated premieres for the Summer 2021 anime season that includes some that aren’t a part of the traditional schedule.

Read on for our Top 10 Most Anticipated Anime of the Summer 2021 season, and let us know what you’re going to be watching in the comments! Which anime are you most excited to see? You can even reach out to me directly about all things animated and other cool stuff @Valdezology on Twitter!

My Next Life as a Villainess X

My Next Life as a Villainess: All Routes Lead to Doom was one of the few anime that managed to release during the peak of the ongoing COVID-19 pandemic in the Spring 2020 anime season, and it was incredibly well received as it offered a new kind of romantic harem comedy. With a girl being reincarnated into the world of her favorite dating sim, she takes on the life of Catarina, the villain of that sim and does her best to be kind and avoid the death flags her character originally got in the game.

This left her at the end of the first season with a huge group of friends who all are not-so-secretly pining for her, and with the second season taking this further, now this group is openly competing for her attention while Catarina herself remains just as blissfully aware of what her friends’ true intentions are as she was in the first season. It’s probably going to be the main romantic comedy to watch this season.

It’s not a new anime season without some kind of notable sports anime release in the new wave, and thankfully we have quite the unique looking one with Re-Main. An original anime production coming from Studio MAPPA’s increasingly packed slate, the series follows Minato Kiyomizu as he joins a high school Water Polo team and they all vie to be the best team around. The series features a staff of some heavy hitters as well with Tiger & Bunny writer Masfumi Nishida serving as director, and voice cast that includes some My Hero Academia and Jujutsu Kaisen stars. It’s likely going to be one of the more relaxing and better looking productions of the season, above all else.

The second season of That Time I Got Reincarnated as a Slime was waylaid due to the ongoing COVID-19 pandemic, and so the second half of the season will finally be making its return this Summer to round out this next round of new episodes. The first half of the season brought some dramatic changes to Rimuru and the rest of Tempest, and now Rimuru has become a full Demon Lord as a result. But as we have already seen, this upgrade has brought on some major new challenges for every citizen and this will only be getting far more intense from here! A welcome return, for sure.

Speaking of welcome returns, Miss Kobayashi’s Dragon Maid is finally coming back for a second season. The second season was announced to be in the works a few years back, but production was understandably delayed due to the COVID-19 pandemic and the tragic arson of Kyoto Animation’s 1st Studio building. Now Kyoto Animation is back in full swing, and is doing so by honoring the members of its staff that unfortunately cannot be a part of the new season. Bringing back all of the fan favorite faces from the first season, this second switches things up by introducing a new dragon, Iruru, to the mix. If you loved that first season, this second season is bound to scratch that same itch.

Although this was technically a part of the Winter 2021 season in Japan, the much anticipated second season of Beastars will finally be getting an official international release through Netflix in the Summer 2021 season. Following the intense cliffhanger left over from the first season, there’s quite a lot that Legoshi is currently dealing with as he has not only made his feelings for Haru known but Juno has made her feelings for him known as well. Not only that, there’s still a grander mystery afoot that needs to be unveiled through the rest of the season that’s bound to make for an exciting watch.

Some fans have already gotten to see the first episode of this series following a special event, and the hype is already through the roof for this one as a result. This is likely going to be the most intriguing new original anime series coming out this Summer. Animated by Studio Madhouse and featuring Shingo Natsume (One-Punch Man, Space Dandy, Tengen Toppa Gurren Lagann, and more) as the writer and director, the series features a group of students developing strange powers in an even stranger universe. This could be a big one.

Funimation describes Sonny Boy as such, “It’s an ordinary summer vacation…except for the fact that Nagara’s high school has mysteriously drifted into another dimension. As the students begin to develop strange new powers, will they work together to survive the alien environment and find a way home, or will their newly formed factions and rivalries turn on each other?”

Masters of the Universe: Revelation

One of the more intriguing new animated projects coming from Netflix this year is a new joint production with Mattel Television picking up from the events of the Filmation produced He-Man and the Masters of the Universe animated series from the 1980s. Kevin Smith serves as showrunner for Masters of the Universe: Revelation, and it’s got animation produced by the same studio behind Castlevania, Seis Manos, Blood of Zeus, and more, Powerhouse Animation. The first five episodes will kick things off this Summer, so we’ll soon see how this sequel shakes this up!

Netflix describes the new animated series as such, “The war for Eternia culminates in MASTERS OF THE UNIVERSE: REVELATION, an innovative and action-packed animated series that picks up where the iconic characters left off decades ago. After a cataclysmic battle between He-Man and Skeletor, Eternia is fractured and the Guardians of Grayskull are scattered. And after decades of secrets tore them apart, it’s up to Teela to reunite the broken band of heroes, and solve the mystery of the missing Sword of Power in a race against time to restore Eternia and prevent the end of the universe.”

Shaman King surprised fans of Hiroyuki Takei’s original manga series when it was revealed that the series was coming back for a new anime. Although the first anime adaptation was received well enough two decades ago, this newest anime is a much more faithful adaptation of the manga. This rebooted take on the series originally premiered earlier this Spring in Japan, but now fans in other territories will be able to enjoy it as part of the Summer 2021 anime season. Meaning that we’ll finally get to see whether or not this reboot has stuck the landing!

Another major anime that premiered last season in Japan, but is hitting during the Summer for other territories is the anime adaptation for Hiro Mashima’s newest series, Edens Zero! Mashima’s previous work Fairy Tail continues to be one of the most popular action anime and manga franchises out there, so this follow up series has quite a lot to live up to as it takes on a completely different kind of world than Mashima has ever attempted. With its science-fiction like take seeing the titular Edens Zero crew zipping through space, the series has been a big hit with fans in Japan so far. Now we finally get to see what the fuss is all about!

Crunchyroll and Adult Swim have teamed up for a few original anime projects, and the first coming our way is a new series from Production I.G. With B: The Beginning‘s Kazuto Nakazawa serving as the director. Naturally, Fena: Pirate Princess is one of the more mysterious projects coming our way this Summer because there’s so little we know about it overall but that’s also what makes it one of the more exciting. This one definitely could be a blockbuster hit.

Crunchyroll and Adult Swim describe the series as such, “Fena: Pirate Princess is a 12 episode original anime series that tells the tale of a young orphan girl, Fena Houtman. Fena has been raised on an Island where there is no hope of becoming anything more than chattel, to be used and discarded by soldiers of the British Empire. But Fena is more than just another powerless orphan. When her mysterious past comes knocking, Fena will break the chains of her oppressors. Her goal: forge a new identity, free of bondage, and search for a place where she can truly belong and find out the true mysteries behind a keyword ‘Eden.’ It is the story of a lifetime adventure she and her crew of misfits and unlikely allies will have, in pursuit of her goals!”