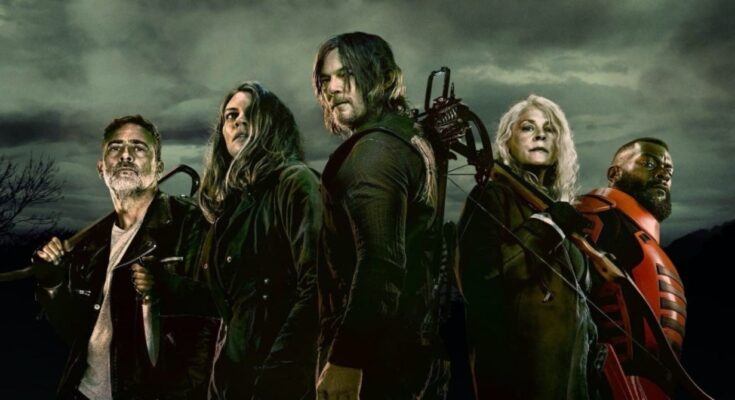 Nothing lasts forever on The Walking Dead — and with just 24 episodes until the end, executive producer Denise Huth hopes audiences are satisfied with the coming conclusion to 11 seasons of the AMC zombie drama. The Final Season of The Walking Dead will air through 2022 in three parts, each with eight episodes, as part of an epic ending AMC calls The Final Season Trilogy. Before the end begins August 15 on AMC+ and August 22 on AMC, Huth talks about sending the show to the grave after 12 years on air and why the world will likely never again sink its teeth into a phenomenon like The Walking Dead:

“We’ll go out with a bang. Nothing lasts forever,” Huth said during a Twitch live stream with TWDUniverse about the eleventh and final season of The Walking Dead. “It’s a cool story, and I’m so proud, and I’m so grateful that we’ve been able to tell it as fully as we’ve been allowed to do, and that’s one hundred percent a credit to the fans. If fans don’t show up, the show doesn’t go on.”

Huth joined the live-action adaptation of creator Robert Kirkman’s comic book in 2005, half a decade before The Walking Dead came to life at AMC Networks under series developer and then-showrunner Frank Darabont. Angela Kang, a writer-producer since the second season in 2011 and showrunner since Season 9, heads the writer’s room that has plotted and pitched the series finale to AMC.

“We were very, very fortunate right from the beginning that it was lightning in a bottle — with the characters, and the story, and the audience. It all came together,” Huth said. “11 years later, 11 seasons later, to be here is an honor. This is a pretty rare era for television. It’ll probably never happen again in the world of streaming, which wasn’t much of a thing when we started. I’m proud.”

Huth added: “I just want to get through it and do the series proud and do these characters proud. You can never satisfy everyone, but I hope for the most part the audience is happy with the conclusion.”

The Walking Dead might be without the survivor who started it all — Rick Grimes (Andrew Lincoln) disappeared aboard a helicopter and will return only in theaters — but the final season feels like the first, only with a scope and scale that is “much bigger.”

“The thing I’ve noticed the most this year is actually just some of the shots, the way the directors are choosing to film things feels very Season 1 to me,” Huth told AMC’s TWDUniverse. “There’s a few moments where I’m just like, ‘Oh!’ It takes my breath away, it takes me right back to the pilot. There are subtle moments that are in there and some that are a little more obvious, but we always remember where we came from.”

Follow the author @CameronBonomolo on Twitter for all things TWD. The Final Season of The Walking Dead premieres August 22 on AMC and is streaming early August 15 on AMC+.