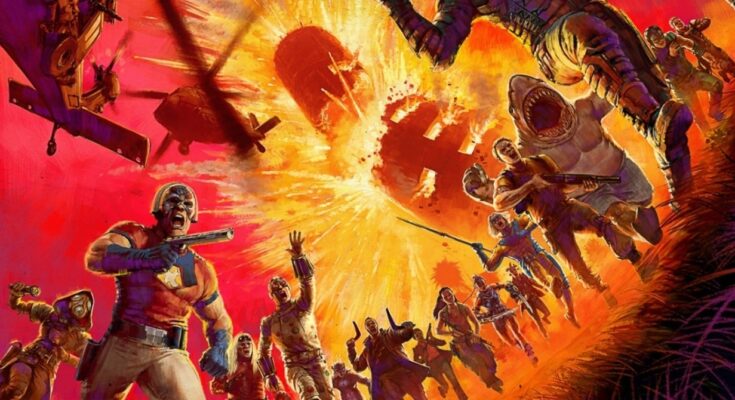 The Suicide Squad finally arrived in theaters and on HBO Max this weekend, fully cementing James Gunn’s unique take on the DC Comics universe. The film has made its bombastic, violent approach abundantly clear, with Gunn indicating that he had permission to kill off any character he wanted within its twisted ensemble. It’s pretty safe to say that fans were expecting some casualties in The Suicide Squad — and that the film delivered in spades. A number of characters met their end in one way or another over the course of the film, so much so that it almost might be hard to keep track of.

So, who all did kick the bucket in The Suicide Squad? Keep reading to find out, and share your thoughts with us in the comments below! Obviously, major spoilers for The Suicide Squad below! Only look if you want to know!

Early on in the film, a team of Suicide Squad combatants stormed a beach on Corto Maltese — only for them to be met by hordes of the island’s soldiers. As it turned out, Blackguard (Pete Davidson) was secretly working as a double agent for them, but that definitely didn’t grant him safety, as his head was blown clean off in the ensuing fight.

The fight also saw Mongal (Mayling Ng), the alien warrior who hails from Warworld in the comics, try to bring down and crash one of the soldiers’ helicopters. That crash ended up being much more fiery than expected, however, and Mongal was burned to death.

Javelin (Flula Borg) was also among the casualties of the opening fight, being stabbed in the chest and dying by the side of Harley Quinn (Margot Robbie), who he bestowed his trusty javelin to.

Captain Boomerang (Jai Courtney) was one of the few returning faces from 2016’s Suicide Squad — but ultimately, his role in this film was relatively small. After throwing a handful of upgraded boomerangs, Boomerang was stabbed across the face with shrapnel, before being cut in half by the blade of a helicopter.

In one of the most creative (and heartbreaking) deaths of the movie, T.D.K. (Nathan Fillion) — the film’s version of Arm-Fall-Off Boy, used his detachable arms to get the upper hand on some of the soldiers. Ultimately, this backfired, and he was left flailing until his death as a result.

Meanwhile, Savant (Michael Rooker) quickly decided to flee the chaotic battle — but that didn’t work out for him. Savant tried to swim away from the island, only for Amanda Waller (Viola Davis) to activate the bomb in his neck, blowing his head clean off.

The next notable death didn’t occur until way later in the film, as Corto Maltese dictator Silvio Luna (Juan Diego Botto) tried to develop a romantic relationship with Harley, believing that proposing marriage to her would elevate his status as the country’s ruler. Harley initially accepted, but once she saw the true nature of Luna’s tyrannical rule, she shot him in the chest. As Luna died, Harley monologued about how she deserves to find a lover with less genuinely evil intentions.

As the Squad made their way to Jotunheim to track down the truth of Project Starfish, they recruited Milton (Julio Ruiz), a getaway driver and member of the Corto Maltese Resistance. As Jotunheim began to fall and was invaded by the army’s soldiers, Milton was killed in the crossfire — but outside of Polka-Dot Man (David Dastmalchian), none of the villains he was with even recognized him upon learning of his death.

The lead scientist behind Project Starfish, The Thinker (Peter Capaldi) initially seemed to be an ally of the Squad, leading them to Jotunheim, only for the group to learn of his role in the torture of Project Starfish — and particularly of Starro himself. This only made his death at the hands of Starro, who got revenge by literally ripping The Thinker limb from limb with his tentacles, all the more rewarding.

Once the truth about Project Starfish — and the American government’s role in it — was brought to life, several of the Squad members wanted to take that conspiracy to the public. Among them was Rick Flag (Joel Kinnaman), who copied the evidence onto a hard drive, which quickly put him in the crosshairs of Peacemaker (John Cena), who wanted to keep it a secret for the sake of diplomacy. The two engaged in a brutal bit of hand-to-hand combat, before Peacemaker stabbed him in the heart.

After Starro was unleashed from Jotunheim, the kaiju began to use his spores to mind-control anyone nearby — and Mateo Suarez (Joaquin Cosio), a military general and Luna’s right hand man, was among them. Ultimately, Suarez was assassinated in the fight that ensued.

Defying their orders from Waller, the remaining members of the Squad decided to fight Starro and save the people of Corto Maltese, each using their unique abilities to do so. While Polka-Dot Man was apprehensive to utilize his metahuman powers to their fullest capability, he was ultimately able to channel his rage for his mother into the fight, triumphantly owning his powers as a superhero. Of course, he was then immediately crushed to death by Starro’s leg.

Ultimately, the team was able to defeat Starro when Harley stabbed him in the eye with her javelin, allowing for Ratcatcher 2’s (Daniela Melchior) rats to swarm in and eat his nerves and blood vessels alive. While the death was visually astounding, it was also undeniably heartbreaking, as Starro used his final words to remark to the group that he’d just wanted to live among the stars before he was captured and tortured by humans.

The Suicide Squad is now available in theaters, and to stream on HBO Max.

If you haven’t signed up for HBO Max yet, you can try it out here. Note: If you purchase one of the awesome, independently chosen products featured here, we may earn a small commission from the retailer. Thank you for your support.