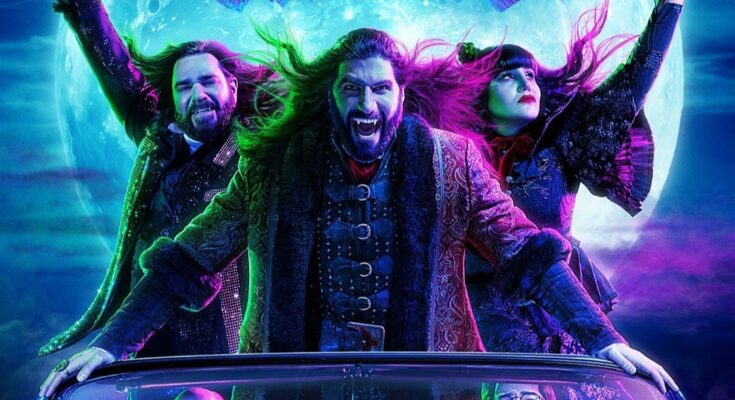 The horror mockumentary renewed for season 4

What We Do in the Shadows has overtaken American Horror Story as FX’s most important show for a variety of reasons. The show has often received a higher critical rating.

The mockumenatry is based on the film by Jemaine Clement and Taika Waititi. It follows the wacky nightly pursuits of vampire roommates. The star characters of the show are Nandor (Kayvan Novak), Laszlo (Matt Berry), Nadja (Natasia Demetriou), and Colin Robinson (Mark Proksch).

Here they attempt to navigate the overwhelming modern-day world of Staten Island by the help of their human friend, Guillermo (Harvey Guillén).

Executive producers are Clement, Waititi, Paul Simms, Stefani Robinson, Sam Johnson, Garrett Basch, and Eli Bush. What We Do in the Shadows is produced by FX Productions.

It has been renewed for a fourth season by FX. The horror comedy franchise first gained traction with the 2014 mockumentary film of the same name. It shows the lives of several vampires who share a Wellington flat. Taika Waititi, a New Zealand actor who also played a 379-year-old vampire in the film, wrote it.

Waititi was joined on the project by Jermaine Clement and Jonathan Brugh. After the film’s success, Clement expanded the project into a mockumentary series, which has now lasted three seasons.

Fans can never get enough of it

The show is scheduled to return on FX for a fourth year. “Fans can hardly get enough of What We Do in Shadows and FX is ready to give that appetite by setting up the fourth year series,” said Nick Grad, FX President. At the present time there is no release date for season 4.

On September 2, what we do in season 3 will be premiered.