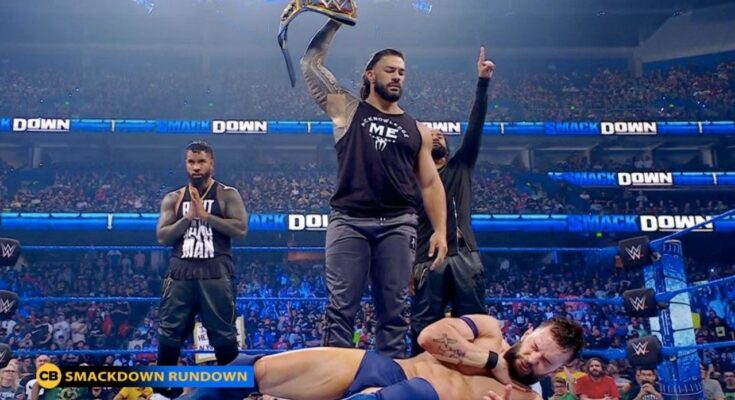 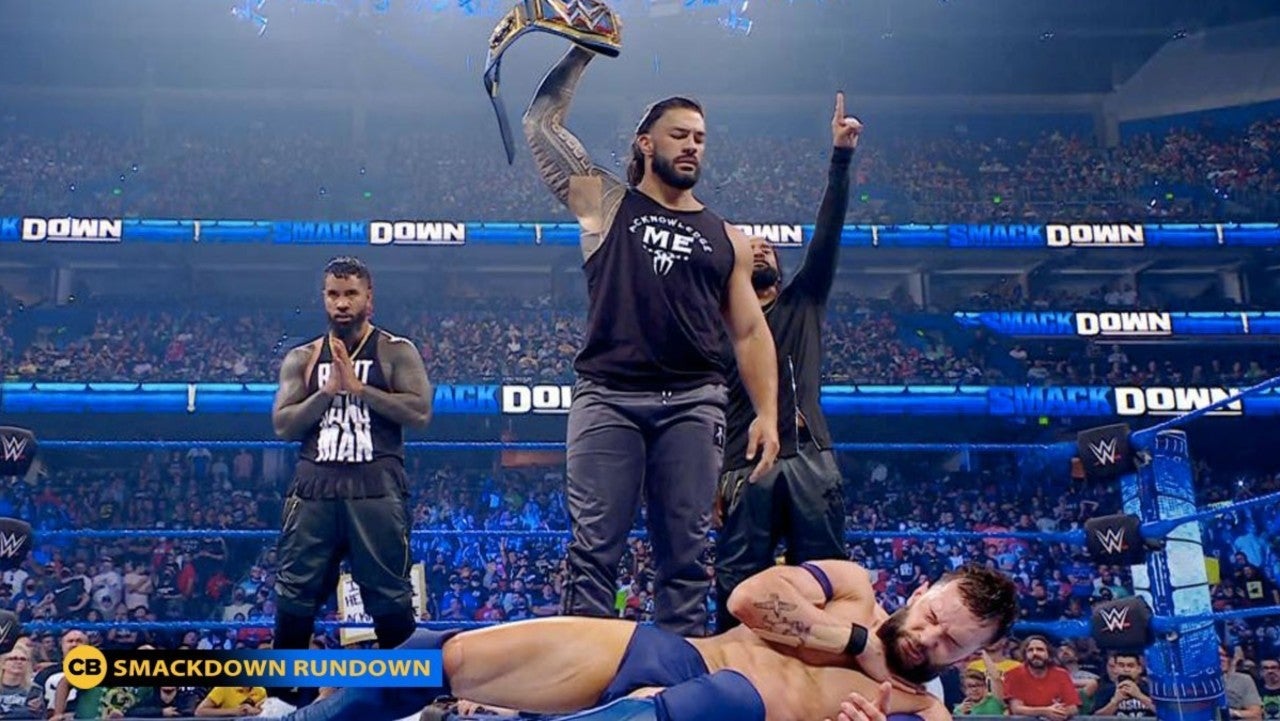 Last night’s SmackDown gave fans a lot to think about, though not all of it was related just to the show itself. Fans were still talking about the show on social media after the broadcast ended for a variety of reasons, and while the show itself is cruising along rather smoothly as we head into SummerSlam season, but not everything is perfect of course, and we’re here to highlight the good and the bad of the night in a new feature here at ComicBook.com titled the SmackDown Rundown. We’ll be here every Saturday, so let’s kick off the latest edition with some talk about what we enjoyed most about the show, what stuck out most, and what might need some improvement.

Latest WWE Releases: I thought it prudent to address the biggest takeaway from the show right up front, as it’s still shocking that WWE released 13 people from NXT while the show was still happening. The releases understandably took focus away from the show and the buildup to SummerSlam, and for many, it left a large cloud over everything else that followed, despite the show being pretty good all in all. Those releases included some shocking names, and this year has been brutal in this regard overall.

We’ve received new details about the releases, specifically in regards to why so many releases have been happening in WWE overall but also the latest from NXT, and our thoughts go out to all those who lost their jobs last night. Hopefully, they are able to bounce back better than ever when their 30-day non-compete clauses end, and we can’t wait to see them thrive wherever they go.

We’ve got even more thoughts on SmackDown, and you can check them all out starting on the next slide!

Once you’re done let us know what you thought of the first SmackDown RunDown in the comments, and as always you can talk all things WWE with me on Twitter @MattAguilarCB!

SmackDown kicked off with Sasha Banks addressing her issues with Bianca Belair, and Banks was back to her oh-so-wonderful heel ways. The reasoning of not being mentioned in Belair’s victory tour, especially after their classic WrestleMania 37 match, makes a lot of sense, so you buy-in from the start.

The EST of @WWE laid down the challenge, @BiancaBelairWWE vs. @SashaBanksWWE for the SmackDown Women’s Title at #SummerSlam pic.twitter.com/03NE3zjtwq

Then Belair came out and thankfully hadn’t lost any of her championship swagger, but the part that completed it all was Zelina Vega, who delivered one of her best promos since returning, and it helped that she had a leg to stand on here. I’m all for a Vega/Belair/Banks back and forth, so this was a promising start.

Rules Out Of Thin Air

Now, here is where things get absurd. While the lead-in to this was great, a segment with Adam Pearce and Sonya Deville killed the momentum by telling Vega she couldn’t book her own matches even if Belair agreed, adding in that a Championship match has to be advertised first and can’t be booked this way. Ummm, since when exactly?

This makes no sense for anyone who has been watching SmackDown over the past year. Everyone seems to just come out and book their own matches half the time, so for the rule to suddenly pop up to suit the plot is kind of lame. Zelina would get a non-title match against Belair later in the night and was told if she performed well she would get her title shot, but unfortunately, she lost, and that brings her record to 0 and 5. I’m all for booking selling a particular narrative (like Baron Corbin’s endless losses lately), but this just feels like pulling the rug out from under Vega at every turn.

Vega delivered a great promo and seemed like a genuine threat despite her previous losses, and adding another one to the mix just keeps halting any momentum she builds up. Unless there’s some big rush of wins coming, I’m not sure how this is benefitting her.

The Turn Is Coming

My faith in how Raw and SmackDown handle incoming NXT stars is quite one-sided, but thankfully the blue brand is on a roll and moving in the right direction with Shotzi and Nox. Not only did we have Nox get a singles win against Tamina (who is holding things down while Natalya is recovering from surgery), but we also got to see the two showcase their fun personalities in a backstage segment. They were great in NXT as a tag team and are similarly great here.

While I know there’s been some debate on whether or not they should use borderline tactics to get wins (like shooting balls from a tank cannon for instance), I’d actually rather they be faces with just a little bit of an edge, and this kind of win fits into that realm quite well. Don’t go too much beyond that mind you, but stuff like this I think works just fine.

Now, here’s the catch. While the win was good and the backstage segment, the match itself was way too brief. The most memorable thing from it was the moment with the tank, and that should never be the case. Shotzi and Nox are great wrestlers first and foremost, and we haven’t really had a chance to see that on display in the ring thus far, which is important for establishing them as the stars they are in front of an audience that isn’t necessarily as familiar with their work as those who watch NXT devoutly every week. These things need some actual time, so while the wins are nice, the matches need some time to breathe.

Big E Is A Treasure

I mean, what else is there to say? Paul Heyman turns around to be scared out of his shoes by Big E, who is standing next to him holding the Money in the Bank briefcase over his shoulder. That would be fine on its own, but it’s the hilarious trolling expression E has on his face as he laughs, since he knows he can cash in this contract at any time and take the title from Roman Reigns.

Seriously, it’s a small moment, but it’s wonderful, and another example of why Big E rules.

Edge has been great on the mic and in the ring since he came over to SmackDown, but the MVP of this particular feud is without a doubt Seth Rollins. Rollins seems to be having a ball with his over-the-top character these days, and Edge provides the perfect foil for the more outlandish persona. The promo was entertaining, as was that suit, and though I thought we could’ve pushed the SummerSlam match announce a bit further, having it set in stone doesn’t hurt anything either.

Balor vs Cena…Sign Me Up!

Finn Balor would address the contract signing that robbed him of a Universal Championship opportunity, and he would utterly destroy Baron Corbin later in the night in a satisfying squash match. That win was necessary for both character’s trajectories, but what was unexpected was the tease of Balor going after John Cena, who ended up signing the contract.

“When I’m done with @BaronCorbinWWE, I’ve got a bone to pick with @JohnCena.”#SmackDown @FinnBalor pic.twitter.com/FhG31SneXk

A Balor Cena match could be absolutely fantastic, so that can’t get here soon enough. Their styles aren’t the same but they both know how to work with just about anyone and make it entertaining, so they should be able to do so with each other as well. It also gives Balor an opponent with star power before or after Cena’s match with Roman Reigns, and that should keep Balor in the main event picture, which should absolutely be the case.

That win against Corbin led to a confrontation between Roman Reigns and Finn Balor later in the night as Balor was calling out Cena again. This perturbed Reigns, and while I was worried we were getting a watered-down Prince from NXT on SmackDown, this sequence went a long way to helping ease those fears.

“That Finn is dead. This Finn isn’t smiling. This Finn wants to face @WWERomanReigns for the Universal Championship and if I have to go through @JohnCena to do it then that’s what I’ll do!” – @FinnBalor #SmackDown pic.twitter.com/G6UaTBjVgi

Not only did Balor never flinch in his face to face with Reigns, but he overcame an ambush from The Usos and delivered his trademark swagger and confidence afterwards that resulted in Reigns coming back into the ring to attack him in a three on one scenario. Reigns got the win in this battle, but Prince stood his ground and came out of it looking as if he can stand toe to toe with Reigns, and the ensuing match between them (whenever that actually takes place), should be epic.

Throw in the Cena angle to all this and you’ve got yourself a main event picture that could last well after SummerSlam.