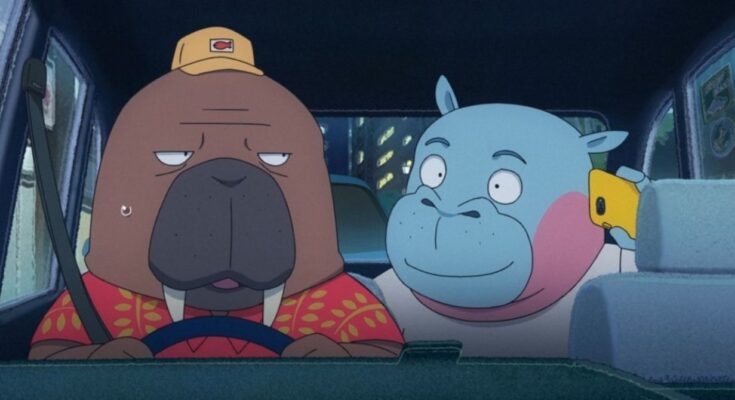 The Spring 2021 wave of anime releases have come to an end as the Summer 2021 schedule prepares for its jump start, but you should really make the time to watch Odd Taxi. The beauty of having each of the Spring series wrapping either their season or full series run is now we can look at each project and determine which have been the true standouts. It’s been a particularly tough season to do so as this season has been full of a ton of hits (seemingly as a way to make up for the peak of COVID-19 pandemic hitting in Spring 2020).

The Spring 2021 season featured the return of major franchises like My Hero Academia, the final run of hits like Fruits Basket, and new original series from prominent creators like Vivy -Fluorite Eye’s Song-. Tucked away in between all of these bigger releases was an unassuming series about a walrus that drove a taxi. As it turns out, Odd Taxi is not only likely the best anime of the Spring 2021 anime season overall, but is likely going to be a major contender for the anime of the year.

Produced by OLM and P.I.C.S., directed by Baku Kinoshita and written by Kazuya Konomoto, Odd Taxi features a world of anthropomorphized animals. Cute character designs in screen shots and trailers might have made the series seem like it wasn’t going to be as appealing as some of the more fantastical anime projects also available this season, but that couldn’t be further from the truth. In fact, Odd Taxi is the most cinematic anime experience of the season.

This unassuming presentation eases you into its grounded world full of characters with complicated desires, motivations, and personalities. The series follows a 41 year old walrus named Hiroshi Odokawa who makes a living driving a taxi. The episodes see him pick up various passengers, and through this we get small pictures of each of their lives as he converses with them. But as the series goes on, we find out that he is just a tiny part of a huge and intricate web of intrigue.

While we follow Odokawa, we discover police are investigating the whereabouts of a missing person. The mystery of that missing person unfolds the more we get a look into each of the characters’ lives as they all tie into one another in some interesting way. Thus each new episode is all the more compelling since we get to learn about each person’s oddities together with the unfolding grander mystery and scheme. Each episode of the series lulls you into a false sense of relaxation (which begins with the incredible opening theme performed by Skirt and DJ PUNPEE), that begins to crack as it unfolds.

Oddtaxi is the real highlight of my week. it has the best OP of the Spring season by far. it’s so chill pic.twitter.com/G3sTSexTuq

It’s hard to truly capture what makes Odd Taxi so compelling without fully diving into spoilers, but that’s also what makes it a fantastic experience. Part of the fun is finding out that there’s so much more depth here than initially led on, and that comes through pretty immediately when you start to break down the incredible script. Not only is the dialogue of each conversation bouncy, but it’s so well performed that you’ll want to keep track of every single line.

You won’t find huge action set-pieces here, nor will you find some grand revelatory message by series’ end, but you will find top notch characterization that I haven’t really seen in other anime lately. You’ll see what I mean when you get to the Bruce Springsteen conversation in the first episode, but it all just feels incredibly naturalistic yet deliberately crafted. There’s even a character that speaks in nothing but rhymes, and it’s incredible that the whole thing doesn’t collapse. It’s just another “oddity” in this world.

There’s so much more about Odd Taxi that I can gush about as this is all really just scratching the surface of what makes its 13 episode journey so special. If you wanted to check out Odd Taxi for yourself, you can currently find it now streaming on Crunchyroll. And you should really do so. You won’t regret it. But what do you think of Odd Taxi? Let us know all of your thoughts about it in the comments! You can even reach out to me directly about all things animated and other cool stuff @Valdezology on Twitter!