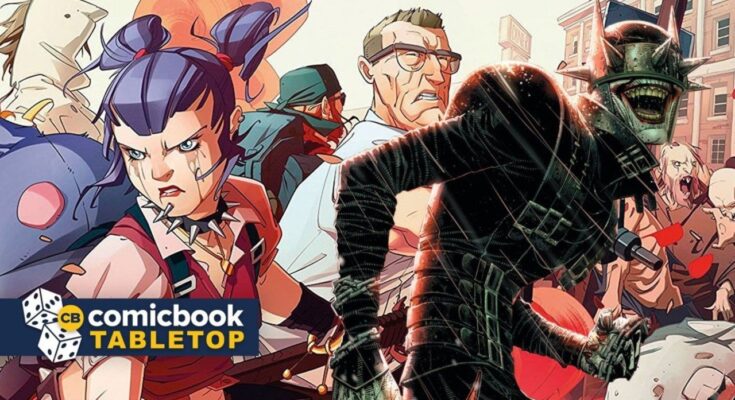 CMON’s Zombicide series continues to expand, and recently the franchise refined the series further with the stellar Zombicide 2nd Edition. Thing is the franchise is expanding even further beyond just other locations and timelines, crossing over with some of pop culture’s biggest franchises, including ThunderCats. During their 20th-anniversary Zombicide: Past, Present, and Future panel, CMON teased another big crossover coming up for the game, revealing that there is some sort of DC-focused Character Pack or expansion coming down the line after they showed artwork for The Batman Who Laughs.

The dastardly villain is part of DC’s Dark Multiverse, which has been at the center of events like Dark Nights: Metal and Death Metal, and is one of the biggest new villains to debut in recent years. He’s from a world where Batman was paralyzed thanks to a toxin from the Joker, and while he did regain movement again, during that time the Joker went on a killing spree in a hospital in front of him that he couldn’t do anything about. The trauma sent Batman over the edge and he killed Joker, but the Joker had the toxin in his heart that was released after he died, and that infected Batman, turning him slowly into the Batman Who Laughs.

“Nobody quite knows where it started, but the dead have started walking again, and they’re hungry… for human flesh. Society has collapsed and only a few Survivors remain. They’ve banded together, looking for shelter and gear. But they’re not content to just hide away, oh no, they’re ready for full on Zombicide.

In Zombicide 2nd Edition, players take on the role of Survivors of the zombie apocalypse. Working together, they must make their way through the various missions. In each one, they must complete objectives and, of course, kill zombies. With each kill, their Adrenaline Points rise. They’ll get stronger, but the zombies will be drawn to their actions, coming in greater and greater numbers. Will the Survivors remain alive, or as some zombie’s lunch?”

Who do you want to see in the DC & Zombicide crossover? Let us know in the comments and as always you can talk all things tabletop with me on Twitter @MattAguilarCB!