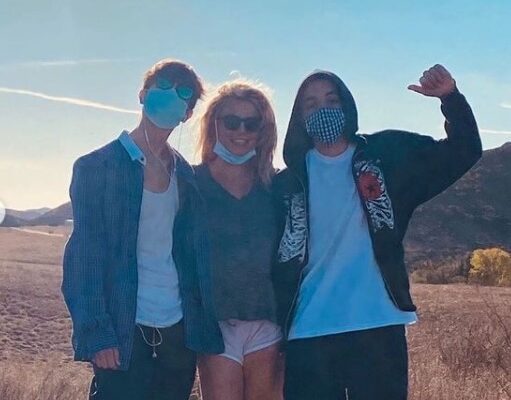 The pop idol, Britney Spears‘ sons, Sean Preston and, Jayden James popped up on social media for the first time in a long while. The boys appeared in a post on their father Kevin Federline’s buddy Eddie Morales’ Instagram. It was truly shocking to see how grown up they are!

Earlier on October 5, Eddie Morales, a friend of Britney Spears’ ex-husband Federline, posted a few photos on his official Instagram account. A few of them revealed Britney spears’ sons Sean (16) and Jayden (15), who often avoid public attention. The duo appeared to be all smiles as they posed for a pic with their father’s pal Eddie.

One of the pics features Kevin’s friend Eddie posing with the two boys on either side of him. In all the photos, the trio had big smiles on their faces. In addition, the post had a video of Jayden flaunting his amazing piano skills.

Britney Spears shares two sons, Sean and Jayden, with her ex-husband, Kevin Federline, but the duo rarely makes a public appearance. Well, the last time they showed up in public was way back in 2015, at the Teen Choice Awards. The two little boys posed on the red carpet along with their mother.

However, Eddie’s recent Instagram post features two teen boys as tall as Eddie himself. Moreover, Britney Spears’ sons looked so grown up that it had become hard to identify them from the little boys we have seen before. Further, Eddie Morales, CEO of Movision Entertainment, also commented about how grown up they were. He stated, “Talk bout seeing my nephews when they were pods smaller than my hands… ”

Meanwhile, just the previous week, Britney shared a fervent note to her boys on account of their birthdays. Britney’s note read that her boys’ birthdays were last week, and unfortunately, they are growing up and want to do their own things.