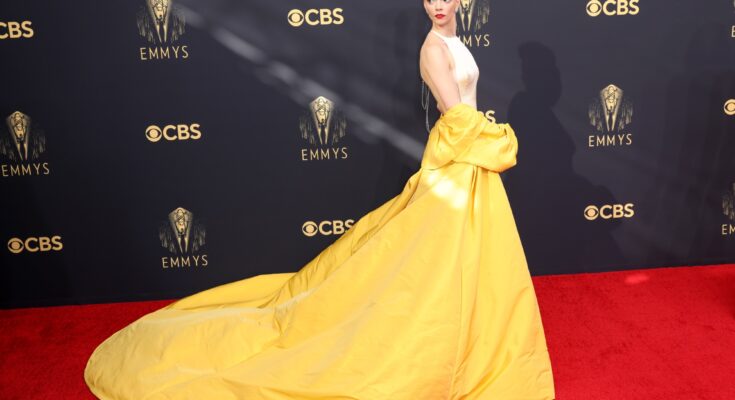 The 2021 Emmy Awards is also about awards but is equally about fashion. Emmy Awards marks 73rd year yesterday and every guest was shining like a star on red carpet. The show was hosted by Cedric for the first time. Meanwhile, The Crown, Bridgerton, Ted Lasso and I May Destroy You were the leading nomination.

This time everyone was extra excited for Emmy Awards 2021 because last year it was all gloomy. This is because in 2020, Emmy Awards was conducted virtually. Remembering last year’s Zendaya’s Christopher John Rogers frock is a complete nostalgia. That is a proof that Emmy Awards has a history of delivering bets gowns and fashion sense.

Continue below to get glimpse from last night’s Emmy Awards’ red carpet looks.

Emmy Awards 2021 topped every award show in sense of fashion

Below are some of the best dresses from Emmy Awards 2021. All the red carpet looks were so glittering that it stood above all the looks from recent award shows.

Anya was the sensation of the show and she looked unbeatable in yellow gown.

Yara’s and Anya’s dress was from the same hub. However, their outfit was completely different in sense of pattern.

She accompanied her dress with a beautiful white neckless that blended completely with her dress.

The Sex education star could not have looked so amazing in any other outfit but Chloe.

Sophia carried pink long length gown with stylish sleeves. Along with it, she blended a necklace with a red clutch.

Dan was wearing a complete blue outfit with a blazer that was in wrapping pattern.

The Mare of Easttown star carried a complete black dress from Armani Prive. She blended her outfit with her natural blend look.

Netflix managed to bag 10 awards whereas HBO could packed 9 awards at Emmy Awards. Moreover, the race between both the streaming service was legit and fun to watch.