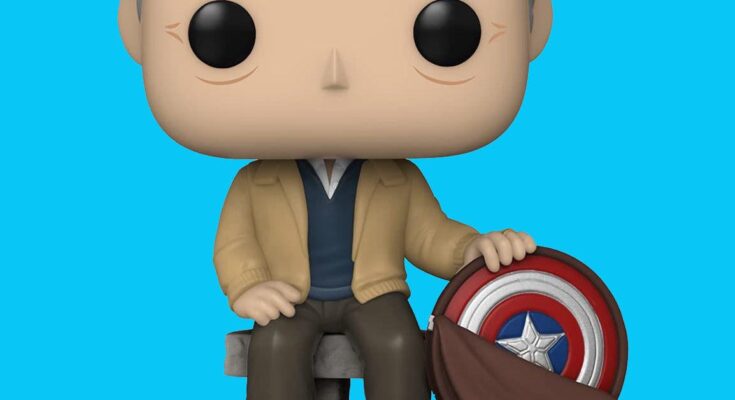 Funko and Marvel kicked off their Year of the Shield Pop figure series back in February with the goal of celebrating heroes “who wield shields to protect the innocent from villains whether they appear in the Marvel comics, movies, or both.” The latest Funko Pop release is likely to be the crown jewel of the series – Old Man Steve Rogers as he appeared in Avengers: Endgame. Pre-orders for this Amazon exclusive figure are expected to go live here on Amazon soon – at any moment in fact. UPDATE: It’s live!

In Avengers: Endgame, we learned that Steve Rogers (Chris Evans) traveled back in time and lived a happy, peaceful life with Peggy Carter. In the final moments of the film, Old Man Steve passes his shield on to Sam Wilson (Anthony Mackie), who eventually took on the role of Captain America in the Disney+ series The Falcon and the Winter Solider.

The Funko Pop depicts the elderly Steve Rogers sitting on a bench with his shield at his side. As noted, this will likely be the crown jewel of the Year of the Shield Funko Pop series, so we expect that they will sell out in pre-order very quickly. So keep tabs on Amazon’s Year of the Shield page. This article will be updated when pre-orders for the Pop figure go live.

That said, don’t panic if you miss out. Restocks for the figure will happen, just as they have with previous releases in the Year of the Shield Funko Pop series. A breakdown of these releases can be found in the links below – and keep in mind that more Pops in this series are coming in October and November.