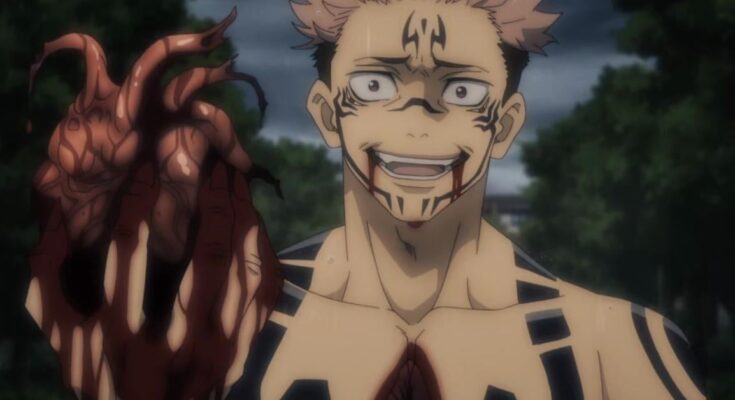 One awesome Jujutsu Kaisen cosplay has recreated Sukuna’s bloodiest look! The major hook of Gege Akutami’s original manga series is that not only is Yuji Itadori the main hero for the series (as much as someone can be in the Jujutsu world, anyway), but he’s also technically the main villain for the series as well. His entire adventure in the series began when he willfully ingested a powerful cursed item, and in a surprising turn of events, ended up becoming the host body for one of the strongest cursed spriits in this new world he jumped into.

We have only seen Sukuna in action a few times throughout the first season of the anime, and the manga as a whole thus far, but each time the spirit has brought with it tons of chaos, mayhem, and even death. But it pales in comparison to his when he decided to force Yuji’s hand and take his body “hostage” by ripping out his heart and forcing Yuji to keep Sukuna active. This results in the bloodiest look for Yuji and Sukuna in the series yet, and now this look has come to life in a cool new way thanks to some brutal cosplay from artist @Tygeesensei on Twitter! Check it out below:

Oop👁👀👁 took my ❤️ out. My very first time applying eyeliner on myself and I got to say. I really like it🤙🏽🔥🖤.

How did I do with eyeliner?

When Sukuna rips out Yuji’s heart and forces Yuji to kill himself in order to take his body back, it raised the stakes for the series in a way fans certainly didn’t expect to see. Not only is it rare for the main character to die so early on in action manga and anime, but it’s even rarer for that death to really only be the beginning for an even more intense journey to come. But that’s also why fans love seeing what’s to come in each new chapter and each new episode.

The anime has yet to reveal whether or not it will be coming back for a second season, but the franchise will be branching out with its first feature film tackling the prequel, Jujutsu Kaisen 0. This movie won’t feature Yuji or Sukuna, but will serve an important role in fleshing out what’s to come in the anime’s future. Makes a second season all the more possible too. But what do you think? How do you like the dynamic between Yuji and Sukuna? What’s your favorite Sukuna scene so far? Let us know all of your thoughts in the comments!