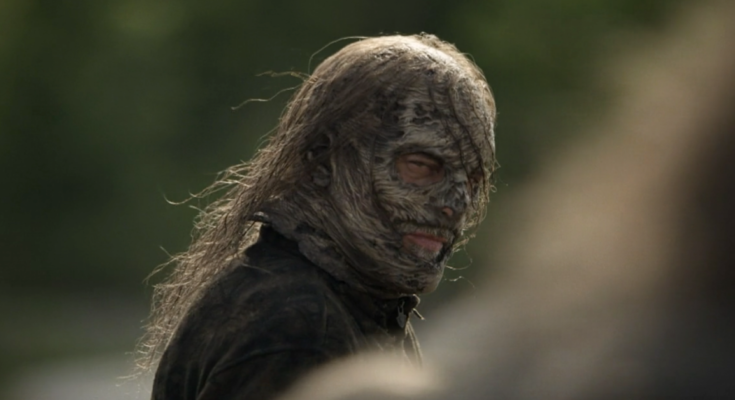 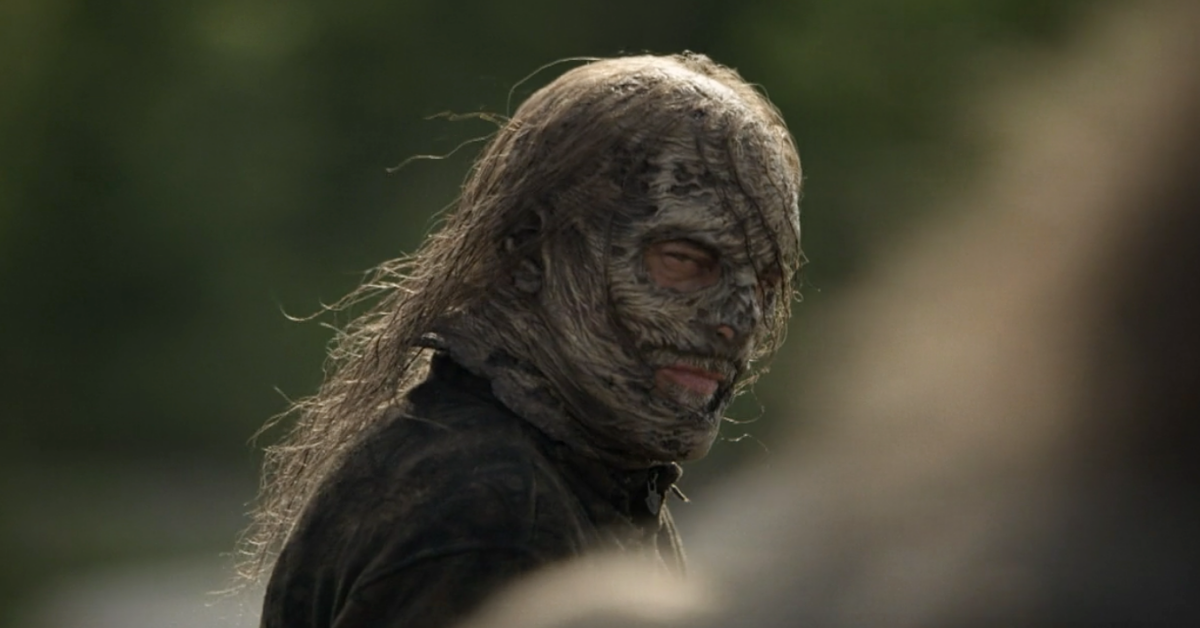 Coach Negan (Jeffrey Dean Morgan) teaches Maggie (Lauren Cohan) how to walk like a walker in a scene from the next episode of The Walking Dead. In a sneak peek from “Promises Broken,” the penultimate episode of Season 11A, Negan breaks out the walker flesh face mask he wore as an undercover agent in Alpha’s (Samantha Morton) army last season. At the time a fugitive from Alexandria — secretly let loose by a vengeful Carol (Melissa McBride) to bring her Alpha’s head — Negan spent just days walking with the Whisperers before killing their leader in a turning point of The Whisperer War.

To save Alexandria and take back Meridian from Pope (Ritchie Coster) and the Reapers, Maggie and Elijah (Okea Eme-Akwari) will walk with the dead, disguised in a loose-fitting face mask because — as Negan points out — it’s “someone else’s face.” This survival tactic unfolds when Maggie’s group herds a walker horde towards the Reapers to end Part 1 of the Final Season Trilogy in “For Blood,” premiering October 3 on AMC+ and October 10 on AMC.

“Maggie hates Negan, that’s it. Maggie wants him dead. Unfortunately for her, the only out, the only way that she’s going to survive certain situations is if she lets Negan into the fold. It’s as simple as that,” Morgan said previously about Negan and Maggie’s temporary truce on Talking Dead. “What it is, is kind of what it is. She hates him but needs him.”

For Maggie, who has resisted killing Negan and avenging her husband Glenn (Steven Yeun), he’s “just an asset” that has proved useful on the mission to Meridian that most of their group did not survive.

“The mission has become more important than any one individual or any one dynamic that exists between them,” showrunner Angela Kang explained on The Walking Dead: Episode Insider, “and that is true even for her.”

The Walking Dead Season 11 Episode 7, “Promises Broken,” is now streaming on AMC+ and premieres Sunday, October 3, at 9/8c on AMC.

READ: The Walking Dead Recap With Spoilers: “On the Inside”

READ: Why Negan Saves Maggie After Leaving Her to Die on The Walking Dead

Follow the author @CameronBonomolo on Twitter for all things TWD. The Walking Dead airs Sundays at 9/8c on AMC.