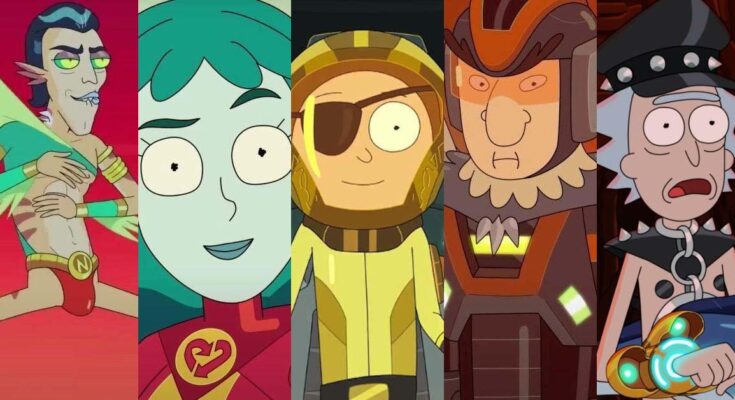 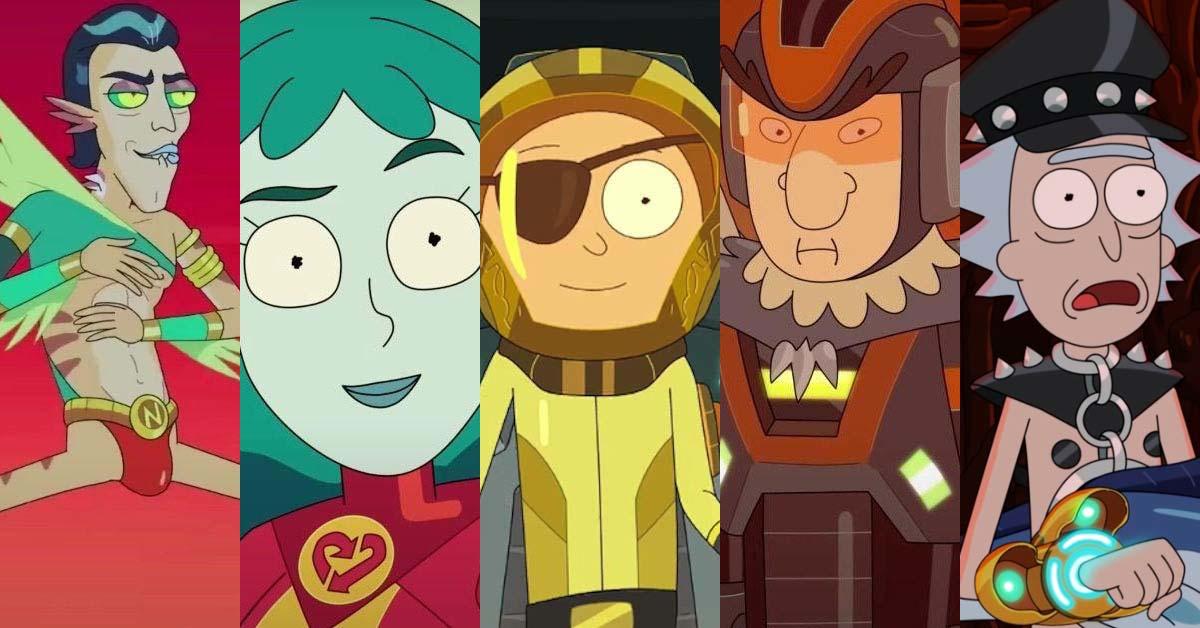 The choice for worst episode of the season probably won’t be a surprise to anyone. There might be some who disagree on where “Rickdependence Spray” lands on their lists of respective favorite episodes of the season, but it’s likely nowhere near the top for the majority of fans. Not only did it receive the most vocal negative feedback in the season overall, but this honestly might be the series’ first real example of “going too far.” While it does have the same central conceit as many of the series’ better episodes of running with a single joke until its exaggerated outcome, the central joke here started out from such a grody place that the series could only go further with it in an attempt to top it. It went from being grossly curious to grossly unpleasant by the end of it all.

Speaking of taking a single joke and running with it, that’s the same core conceit of “Thanksploitation Spectacular” as well. It’s a much more interesting joke as it takes the Thanksgiving holiday background to fuel an adventure focusing on the rivalry between Rick and the President, but the jokes don’t always land in the escalation of them. The joke of the smart turkeys kind of feels one-note and almost hindered by the seasonal motif. Keith David gets to say so many wacky things as both versions of the President, but something about the final battle feels lacking.

The reveal of a species of Thanksgiving themed aliens lacks the same kind of punch we have seen in better episodes, and silently just enjoying dinner is an unique step for their relationship, but it’s missing that oomph we got from better episodes exploring Rick and the President’s rivalry in the past. It’s fun, but lacking that one final thing to really make it stand out.

“Mortyplicity” serves as Season 5’s version of the vignette collection episodes like “Interdimensional Cable,” “Morty’s Mind Blowers,” and “Never Ricking Morty” of past seasons. It’s an episode full of rapid fire jokes and ideas that launch at such a speedy pace that they never outstay their welcome. The exercise of seeing different kinds of stories and settings for the Smith family first kicks off with the mystery of who could be hunting them down, but soon explodes into the kind of madness you’d expect.

Unfortunately when stacked against many of the other episodes in the season, there is just nothing really to connect with. The novelty of the various types of Smith families and their deaths runs its course pretty quickly too. Better jokes than the episodes on the bottom of this list, but less to go on than what comes next. Also, the fact it comes second in the season after a great pilot doesn’t help much either.

“Gotron Jerrysis Rickvangelion” is another example of the series running with a single joke to an exaggerated conclusion, but unlike the other episodes ranking below this one at least involves Rick and the entire Smith family. It’s one of the series’ first real dives into anime (unlike the full anime shorts produced before), and while this leads to some tired references, it doesn’t exactly frame the entire episode as expected. Instead there’s a fun riff on mafia film characteristics and yet another exploration of the unique dynamic between Rick and Summer.

It gets a little more credit for being a surprising tie-in to “Rickdependence Spray” as well. At this point in the season, canon wasn’t exactly the primary focus just yet. It manages to take the “giant incest baby” joke to a hilarious new level thanks to this extra bit of novelty, and wraps it all together in a way that feels appropriate for the anime flavors throughout. Those Voltron jokes do run their course early, but they still work more than some of the worse ones in the season.

The penultimate episode of the season trimmed away most of the wilder one-shot jokes the other episodes had, and focused on the primary duo. This season had been markedly short on stories that focused primarily on Rick and Morty’s changing dynamic, but had been dropping small hints that a rift was forming between the two of them. Thankfully the episode in which the two of them break up was satisfying to see in its own right. While the resulting rebound relationships weren’t as satisfying as one might hope from such a big moment like their break up, they do serve the very important purpose of opening Rick’s eyes to how toxic he and Morty are for one another.

It’s better served when taking as part of the season finale as a whole (and when immediately following up from “Rickturnal Friendshine of the Spotless Mort,” so that’s why it’s not ranked higher on this list. It’s an important step when looking to the future of the series as a whole, however, because these character changes can stick around while everything else remains episodic and ever-changing.

The fifth season got off to an incredibly fun start. There were unfortunately no ties to Season 4’s finale (and elements of that finale weren’t tackled until much later in the season), so it does get knocked for that, but it’s one of the stronger standalone episodes of the series as a whole. It’s got everything you want from a solid Rick and Morty episode. It takes a science fiction premise to an exaggerated conclusion, there are smaller hints of canonical lore with the introduction of Rick’s rival, a wacky new character with cede rival, Morty acts like a selfish teen with hilarious consequences, and there’s something for nearly every character to do.

The only reason it doesn’t quite make it higher into the top five is because the four upcoming episodes push a little harder into the actual character development. The premiere episode is unfortunately hindered by the fact it’s a premiere at all. That’s admittedly splitting hairs, but being the first episode means it couldn’t quite deliver on all of the emotional stakes that later episodes would get their fill of. It does what it needs to get Season 5 started, but that’s all it could really do.

“Amortycan Grickfitti” is full of wild one-shot jokes and ideas. The difference here from the other vignette filled episode, however, is what the series does best. Anchoring all of the Hellraiser, Transformers, Marvel and more parodies are the relationships between each character. This is one of the few times we get to see Rick explore a different point of view on Jerry, and like the episodes between them in the past, it’s quite eye-opening and moves their dynamic forward in a new direction. The same can be said for Jerry’s relationship with Beth, and that’s not something we get a lot of in the season overall.

Morty and Summer also have a fun adventure on their own, and once again, it’s a dynamic we don’t get to really see elsewhere in the season either. It’s probably the season’s best example of using all of the characters while keeping that balance of character growth, wacky ideas, and outlandish science-fiction fantasy premises the series is known for. The jokes aren’t admittedly as strong as some of the others this season, but it gets so much else right.

Just as how the season came to a great start, it had a great end as well. The Season 5 finale satisfied in a number of ways as it finally delivered on some of the reveals fans have been waiting a long time for. It’s one of the strongest episodes of the season, easily, and deserves a spot in the top list of episodes overall for what it accomplishes. It doesn’t quite reach the summit, however, because of just how much of those reveals it crams into its second half. It’s a finale that capitalizes on the build up of seasons before, but that also means it suffers the same problem most season finales have.

It doesn’t quite stack up as an episode by itself (especially when you have to combine with the first half, “Sarick Mortshall” for the full experience) and those reveals come at high speeds back-to-back without much room to really absorb it all on first watch. It’s a great episode to analyze, and makes the top three, but not quite all the way there.

The series really dug its heels into the emotional growth of the duo early on in the season’s run. “A Rickconvient Mort” takes the wild idea of Morty dating a Captain Planet parody and makes it one of the most compelling episodes in the entire series overall. It emotionally challenged Morty in a way he had never been before, and explored what his first real dating and relationship experiences were like.

It was Morty’s first true romance of the series, and while it didn’t end quite well (in an explosive fashion fitting for this series), Rick and Morty didn’t undercut all of that emotional growth with a joke. It’s a truly “grown up” episode of the series. It’s even wilder when you consider all Morty did to make it happen, and the apocalyptic debauchery B plot for Rick and Summer in the same episode. There are still plenty of fun to be had, but it’s the quieter and more grounded moments here that really make this one stand out and stick the landing.

“Rickturnal Friendshine of the Spotless Mort” marked a majorly unexpected turning point for Season 5. Not only was it the last episode before a several week hiatus, but it was the first episode in the season that had tackled any of the serialized canon from the seasons prior (unless you count the brief Space Beth shout out in the second episode). Picking up from the events of the Season 4 finale at last, this one saw Rick dive into Birdperson’s memories.

This not only revealed more about their past together, but weaved these new revelations with a highly fun science fiction premise and some kooky visuals. Not only that, but these revelations then pushed Rick’s character in a new direction too. There’s a lot of forward momentum here not seen in the rest of the season, and that’s even including the final two. It takes the top spot of the season overall because it’s not only a hilarious episode, but the pace of that comedy, lore, and emotion finds a balance that’s truly unmatched by the rest of the season. And honestly, unmatched by many of the series’ best episodes overall.